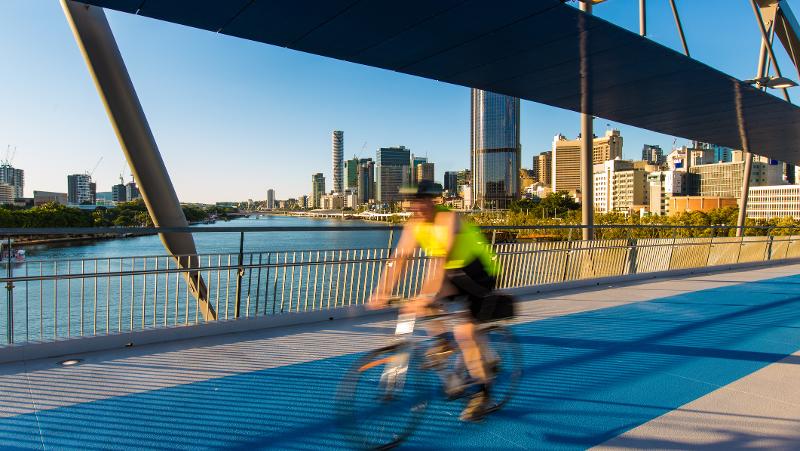 Cycling will be in the spotlight this week at the 8th International Cycling Safety Conference (ICSC2019) in Brisbane … but how does the host city rate when it comes to being a great cycling city?

Around 160 delegates from 20 countries are visiting Brisbane for the conference, which runs from today (Monday, November 18) to Wednesday and is hosted by QUT’s Centre for Accident Research and Road Safety-Queensland (CARRS-Q).

It’s the first time the event has been held in the Southern Hemisphere and the program will address cycling challenges and best practices – current and future – that affect riders, communities and authorities around the world.

Delegates will also test ride some of our city’s best bikeways while they are here, and meet Brisbane cyclists at a free People’s Night on Wednesday that is open to the community.

To coincide with the conference, we asked three QUT experts (and cyclists) about cycling in Brisbane.

They share their views here on how Brisbane ranks as a cycling city, what we do well, what needs improving, and why people should ride bikes.

“Brisbane is a city of contrasts when it comes to cycling.  We have some really impressive examples of cycling and walking facilities – like the green bridges and the Riverwalk – but a real lack of critical safe connections in some areas discourages people who live nearby from riding to work.  There has been a lot of investment but we still have a long way to go.  Brisbane’s hills are a real attraction for training riders, but can be a real barrier to those who are not super fit.

Our observational studies have demonstrated that a large majority of drivers and cyclists interact in a safe and respectful manner but there are too many media reports of unpleasant incidents which feed the fears of potential riders.  We need to promote our successes in Brisbane, while getting on with building safer cycling facilities and changing the attitudes of drivers and potential riders.

Brisbane will never be Amsterdam or Copenhagen – but give me our weather any day.”

“This spoiled Dutch cyclist loves to cycle in Brisbane. How I would rank Brisbane? Its recently built infrastructure is truly awesome. But many challenges remain, such as steep hills, blistering summer heat, poor way finding, missing links in the network, and sharing roads with fast motorized traffic.

So will Brisbane ever be able to compete with cities like Amsterdam?  Isn’t Brisbane too different?  In a historical context it is not!  In the early 1970s, Dutch policy also favoured car use. Medieval city centres were demolished to create space for high-capacity roads and car parking. Cyclists were banned from main roads and exposed to high speed motorized traffic. The road toll rose to an all-time high. To combat congestion and increase safety, cities were forced to redesign their car-centred infrastructure and now prioritize pedestrians, cyclists and public transport. Where cyclists share the road with motorized traffic, speed limits were set at 30km/hr. (Want to learn more?  See the video below.)

Brisbane has the potential of becoming the cycling capital of Australia. Many trends favour that: the rising use of electric bicycles, the green bridges and other urban projects that will eliminate the missing links in the bicycle network. Looking for a quick and low-cost solution to grow the network further? Go for 30 km/hr speed zones where cyclists need to share the road with motorized traffic.

Come on Brissie, let’s beat Melbourne first and then take on Amsterdam.”

“Perspectives of Brisbane as a cycling city are often influenced by our expectations and personal experiences rather than facts. My experiences stem from the US, a country with similar relatively low cycling rates, so I can appreciate the efforts that are required to increase cycling opportunities for both recreational and transport cyclists, all the while keeping them safe. Brisbane’s budget has a robust allocation of funds and a decade of planning to back infrastructure (including five new pedestrian/bike/bus river crossings), but construction is often slow to actualise, the bike network lacks in connectivity and there is limited consideration of the last kilometre in the transportation hub. I’ve recently completed a sabbatical in Portland, Oregon, a city with similar geographical features, and they have increased their ridership and road safety by creating better connectivity with neighbourhood greenways and decreasing vehicle speeds within neighbourhoods and on city streets. Smart solution Portland!

There are many reasons why people should ride bikes; recreationally, it is just fun and has potential to be highly social. For transport cyclists, it potentially reduces single occupied vehicles, decreasing traffic and emissions. We also now have strong evidence that everyday transport cycling can increase physical activity levels, helping people meet or exceed physical activity recommendations and significantly reducing the risk of chronic disease.

Brisbane has advantages over other places with its climate and has an opportunity to be an international leader in the cycling scene – bring it on Brisbane!”