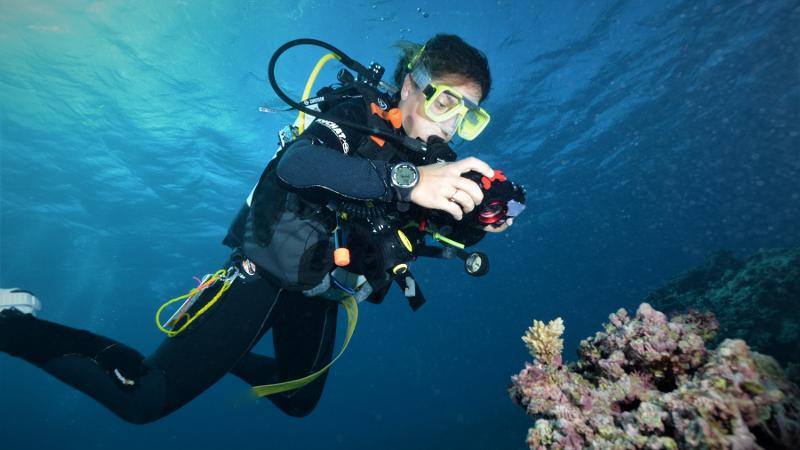 You don’t need a lab coat to be a scientist in Queensland this summer – just togs and an underwater camera.

Phase two of QUT’s Virtual Reef Diver project launched today (December 5) and is encouraging divers and snorkelers to help monitor the Great Barrier Reef by taking underwater pictures of the seafloor and uploading them to www.virtualreef.org.au.

Phase one of the project – which is still ongoing – launched in August and lets members of the public log on and classify existing reef photos from their home computer.

Now the QUT researchers behind the Virtual Reef Diver are looking for citizen scientists who are already out in the field – or, in this case, the water – to add to that photo database.

Unlike the classification task, divers who take new photos don’t need to identify what’s in them.  But they do need to say where they were taken to help researchers better understand the changing health of the reef across its 348,700 km².

QUT project leader and spatial scientist Dr Erin Peterson said the Great Barrier Reef was simply too big for scientists and researchers to monitor it alone.

“We want to tap into the army of reef operators, citizen scientists and tourists who are out on the reef every day, as it is physically and financially impossible for a single monitoring program to replicate their efforts,” she said.

“Many of those people who are out on the reef are already taking underwater images. We want them to share that knowledge by uploading their images of the seafloor to the Virtual Reef Diver website.

“This will provide up-to-date information about the condition of the reef in those locations so that changes can be rapidly identified and tracked.

“We’ll be specifically looking at the quantity of hard coral across the reef and how it changes over time, as that is one of the best reef health indicators.”

Dr Peterson has a few simple guidelines to help reef photographers who want to take part in the project:

“Take and upload as many photos as you want to and, while you’re on the site, take the time to classify a few images,” said Dr Peterson.

“We will use the images and classifications contributed by the public to create a scientific model of the whole reef, so the more information we have, the less gaps we will have to fill in.”

Virtual Reef Diver is the result of the collaboration of QUT, the ABC and ACEMS and was developed as part of a partnership between QUT, ACEMS, FrontierSI, the Queensland Department of Natural Resources, Mines and Energy and the Australian Institute for Marine Science (AIMS).