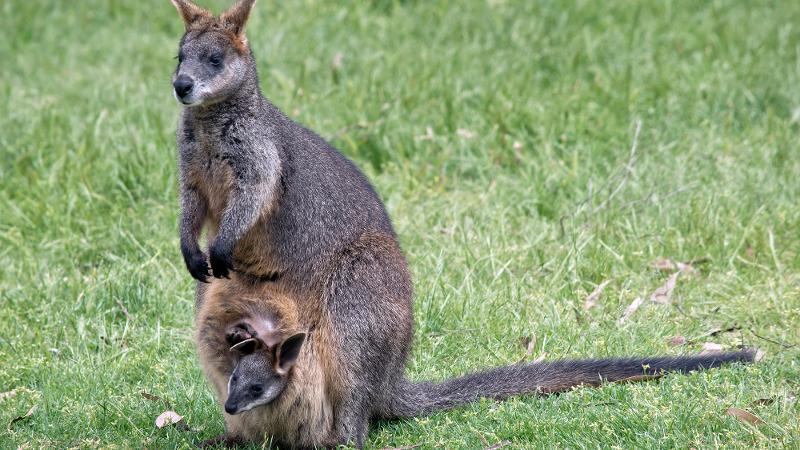 Swamp wallabies, long thought to be a genus all of their own, have been found to be a member of Macropus,  which also includes the large grey and red kangaroos, mid-sized wallaroos, and the smaller woodland wallabies of Australia and New Guinea.

Genetic research by QUT evolutionary biologists, Will Dodt and Associate Professor Matthew Phillips, and Dr Maria Nilsson-Janke and colleagues from Germany’s Senckenberg Biodiversity and Climate Research Centre has proven the swamp wallaby is entitled to hop into the Macropus genus.

“The swamp wallaby is the black sheep of the kangaroo family,” Professor Phillips said.

“They are known as stinkers by farmers and foresters on account of their meat smelling swampy, and differ from other kangaroos and wallabies in their diet, shape of their teeth, unusually crouched hop, and preference, often, for denser habitats.” Dr Nilsson-Janke said the swamp wallaby was the only marsupial that is able to switch to turbo speed during reproduction because it can become pregnant again before it has given birth to the first offspring.

“Despite its anatomical and behavioural differences, we show that the swamp wallaby is genetically placed within Macropus, as the closest relative of the woodland wallabies,” Dr Nilsson-Janke said.

Professor Phillips said it was the swamp wallaby’s retrotransposons that gave the game away.

“Retrotransposons, also known as ‘jumping genes’, literally jump across the genome. These mobile genetic elements make copies of themselves, which reinsert at a different location in the genome.

“If these copies are shown to have inserted in the exact same genome location in different species, then those species have a common ancestry.

“Our study found six different retrotransposons that were uniquely shared by the swamp wallaby and the woodland wallabies, revealing their shared ancestry.”

“According to our analysis, the modern subgenera of the kangaroo genus Macropus, including the swamp wallaby, evolved from a common ancestor about five to seven million years ago as the Australian forests opened up, many of which were eventually replaced by grasslands,” she said.

“New species of large red and grey kangaroos and wallaroos spread into this habitat but woodland wallabies and the swamp wallaby retained their archaic ancestor’s original forest home.”

Professor Phillips said the swamp wallaby still had some mystery.

“Although we have shown that the swamp wallaby clearly falls within Macropus, we also found some evidence for a small portion of its genome being a relic of an ancient, now extinct, kangaroo."

The research was published in Scientific Reports.