A quarter of Australia’s 516 male escorts cater to women and couples, a global survey of the 61 countries which host online male escort websites has found.

But Australia is well behind the United Kingdom in sites catering for women or couples where more than 50 per cent of the 5487 male escorts cater to women and couples, the survey, conducted by by Professor John Scott and Adjunct Professor Victor Minichiello from QUT’s Crime and Justice Research Centre and researchers from The Kirby Institute at the University of New South Wales, found.

“Uganda and Argentina are the only other countries that have more male escorts seeking females and couples than solely male clients,” Professor Scott, from QUT School of Justice, said.

“It’s assumed that men are the primary market for male escorts, and while it is true that most escorts target male clients, our survey suggests a significant emerging market for women who pay for sexual services from men.

“While more than 57 per cent of identified websites catered to male customers only, 11 per cent were specifically for female clients and a similar number of sites were for couples, most of the opposite sex.

The results of the survey are contained in the blog About Male Escorts and will be published as a book chapter in Male Sex Work and Society (Volume II), to be released in 2018. The survey found a total of 324,852 profiles of male escorts online but after eliminating duplications (many male sex workers list on multiple sites) there were 105,009 male escorts. “Other countries with a high percentage of escorts for women and couples include Chile (41 per cent), Germany (42 per cent), Hungary (45 per cent) and Malaysia (46.5 per cent).”

“Malaysia has 88 escorts on its nine sites and 41 of them provide for women and couples, and the United Arab Emirates has 124 escorts for women or couples out of 337 male escorts,” he said.

“In jurisdictions where sex work or same-sex relations are heavily penalised, it is possible that escort sites are known only to participants within relatively closed social networks. They may also be listed on the ‘dark web’ – these sites were not included in the survey. 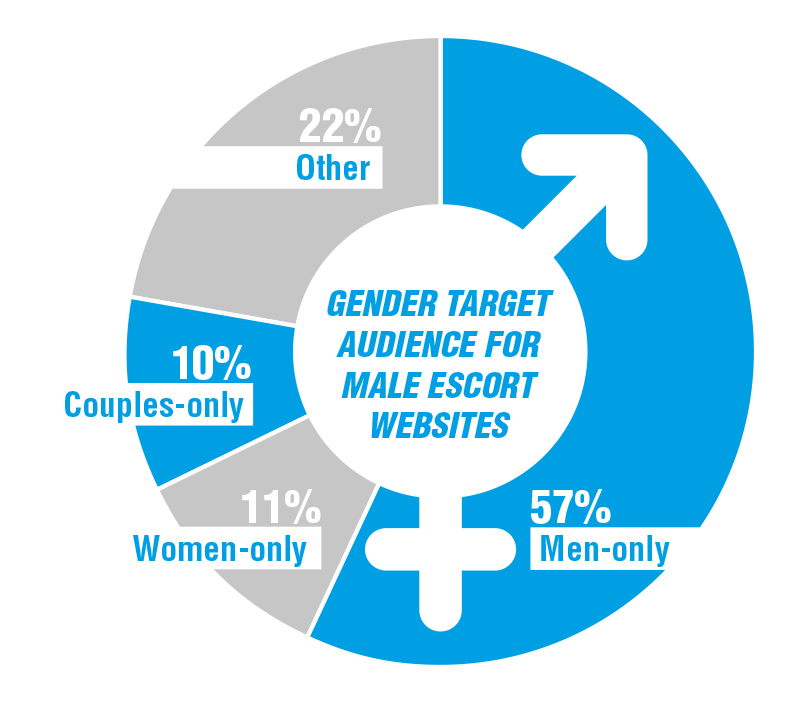 “If you are a woman or a couple seeking a male escort using online male escort services, you are out of luck in Costa Rica, Finland, Israel, Panama and Taiwan where the male escorts have male clients only.

"There are slim pickings in Bulgaria, China, Estonia, Uruguay and Paraguay where each country has just one male escort who has found a niche in the market and offers this service.”

“The average price worldwide seems to be $200 an hour but it can be thousands of dollars for a weekend, especially among the international male escorts who list on websites around the world.

“It’s important to note that websites such as Rentmen and Hourboy included escort profiles from around the world and were often hosted in countries where sex work was legal. These websites were among the largest overall and mostly cater for male clients.

Professor Scott said the survey counted only male sex workers operating online, not those in brothels or massage parlours or outdoor settings.

“The figures fluctuate over time with sex workers and websites entering and leaving the market. The fluidity makes the online marketplace appealing for many.”

To check for the validity and emerging trends over time, a similar survey will be conducted annually.