“Anyone who claims to have been raped is slut-shamed, not believed, immediately called a lying cow. “I was absolutely horrified by the commentary in the press.”

Professor Carrington, a long-time researcher in gender equality and violence prevention, has proposed a trial of women’s police stations in Australia after an extensive three-year, ARC funded study into the key features of Argentina’s women and family police stations.

As part of her advocacy of practical real-world measures to stem the statistic of one woman a week dying at the hands of an intimate partner, Professor Carrington has twice addressed the United Nations Commission on The Status of Women, NGO sessions, in March 2019 and earlier today  (March 24).

Professor Carrington spoke (via Zoom) at the UN session together with leading researchers in Canada and the UK who presented results from their survey of domestic and family violence workers (including police) on what could be learnt from Argentina’s highly successful women’s police stations and implemented in their respective countries. 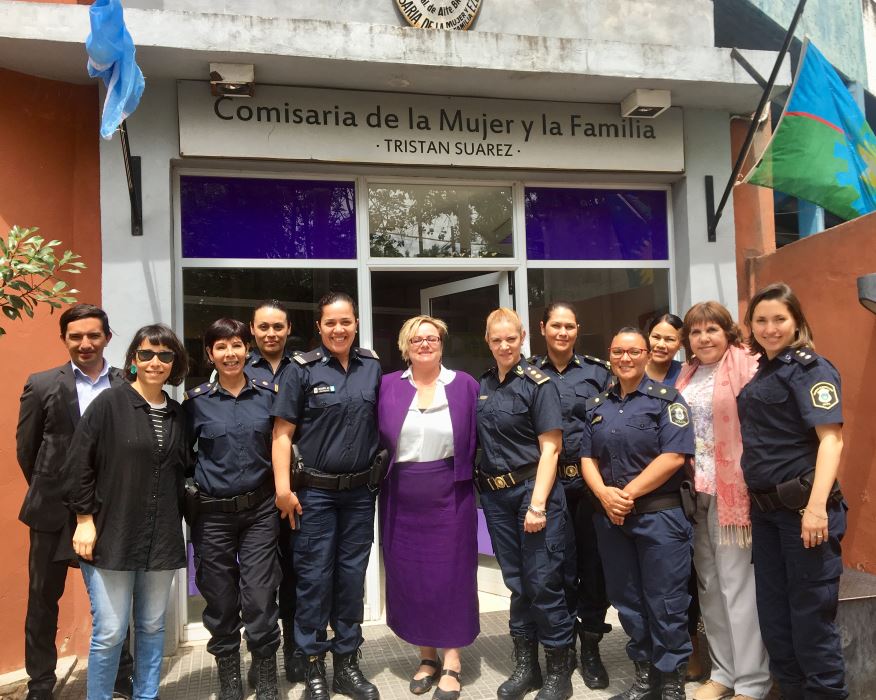 “I was thrilled to hear UK’s top police officer responsible for leading change in how police respond to domestic and sexual violence express her enthusiasm for the survey findings,” Professor Carrington said.

“Dr Sebire is enthusiastic about the survey findings and keen to use them to re-imagine the policing of sexual and domestic violence in the UK.”

The international survey of domestic and sexual violence sectors in UK, Australia and Canada asked which of the following 12 aspects of the Argentinian model could improve the way policing operated in these countries:

“Currently, the UK shows support for 9 of the aspects, with responses varying between 58 to 82 per cent.

“The greatest area of agreement across the three countries was the aspect ‘Provide emergency support to victims of violence’.

“Another key finding shared across all three countries was to “Allow female victims of male violence to choose a female police officer to receive their complaint”, endorsed by 92 per cent in Canada, 86 per cent in UK and 78 per cent in Australia."

A UK domestic and family violence worker’s survey response said the most important way ‘to address gender-based violence is creating a safe space for women to disclose/receive support and tailoring support to individuals,’.

A Canadian DFV worker welcomed women’s police stations for their visibility, and commitment demonstrated by the police station would be a phenomenal contribution to addressing gender-based violence at local levels’.

Among Indigenous Canadian DRV workers’ response was that ‘Each Nation should decide for themselves. For my community, to prevent racial profiling only Indigenous police officers should serve and protect our small community’ and ‘Indigenous women in distress need to have a place where they can go and be received by women who have an understanding and appreciation for their traditional and emotional needs.’.

“It is not acceptable any longer to stand by wringing our hands while one woman a week is murdered by her intimate partner in Australia when we have a model that has proven its worth for stemming violence against women. With all our inquiries and talk we have not been able to increase the safety of women in their own homes.”

Professor Carrington said the women’s police stations have a warm welcoming look and are embedded in the suburbs in Argentina.

“Consequently, women have greater access to justice and appropriate support than they do in male-dominated general police stations,” Professor Carrington.

“Women’s police stations work with both victims and perpetrators to break the cycle of violence. They have constant outreach to the community, joining in festivals and holidays to educate and pass out contact details.

“Not surprisingly, the women police are accepted and welcomed as part of the community.”

The presentation “Re-Imagining the policing of gender-based violence: what the world can learn from women’s police stations” delivered at the United Nations 65th Commission on the Status of Women, NGO sessions in New York.