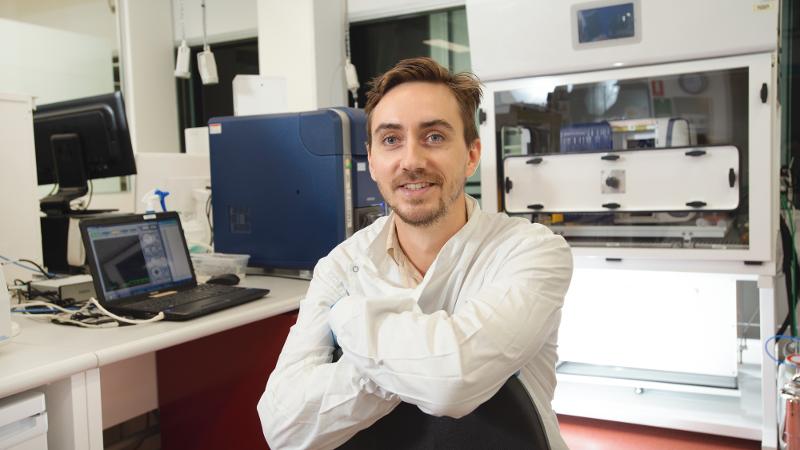 Around 1.8 million Australians have diabetes and more than 4400 endure life-changing foot or leg amputations every year due to their body’s inability to heal foot ulcers. But a QUT PhD researcher is now set to head to the United States to investigate limb-saving healing therapies after being awarded a 2022 Fulbright Scholarship.

Eamonn McKenna is a tissue engineering PhD student with the Centre for Biomedical Technologies (and a QUT biotechnology and business graduate) and part of a QUT team that is developing a breakthrough treatment to heal diabetic foot ulcers. The technology is based on work by Dr Kathryn Futrega and Associate Professor Michael Doran, who are also supervising Mr McKenna’s PhD.

Mr McKenna will head to Tucson in the US early next year on the prestigious Fulbright Future Scholarship to compare the QUT team’s therapy with a similar therapy developed by researchers at the University of Arizona and Stanford University.

He said diabetes was a devastating disease for Australia and the US.

“In addition to the huge loss of life and quality of life, treating ulcers has an enormous cost to both health systems,” he said.

“In America, the cost of just treating diabetic foot ulcers is equivalent to the combined cost of the top five cancers.

“In Australia, the estimated cost of diabetic foot disease is around $1.6 billion every year. To put that in perspective, the combined revenue from the NRL, AFL and Cricket Australia is about $1.7 billion, so these ulcers represent an enormous cost to both Australia and Australians.”

Mr McKenna said the new therapies developed by the QUT team and by the American team used different technology, but were both cell and gene therapies that could one day be incorporated into standard wound care to revolutionise patient treatment.

“I will spend 10 months in the US to work on comparing the two therapies, with the aim of identifying the best one for diabetic foot ulcer repair,” he said.

“After identifying what works best, we will look to further develop the therapy and work towards clinical trials back home in Brisbane and in Tucson.”

The QUT therapy involves genetically modifying cells so that they can heal ulcer wounds.

“People get diabetic foot ulcers from a range of contributing factors and one of the major factors is peripheral neuropathy – nerve damage that can cause numbness or loss of sensation in people’s feet,” Mr McKenna said. “Patients may suffer a foot injury but they may not immediately identify that they have been injured because their feet have reduced sensation.

“Ulcers can develop from something as simple as a pebble in a shoe. Whatever the cause, it can be difficult for diabetic ulcers to heal because patients often suffer poor blood flow to their extremities, and this reduced blood flow impairs healing.”

The QUT team is working with clinical collaborators at the Princess Alexandra Hospital and Mr McKenna has visited patients being treated for foot ulcers during his research to discuss the challenges they face.

“I met one lady who had dropped a glass jar in her kitchen one night and cleaned it up and went to bed … It wasn’t until she saw all the blood on the kitchen floor the next morning that she realised she had a huge shard of glass embedded in her foot, but couldn’t feel it,” he said.

“I think many people who aren’t personally affected by diabetes don’t realise just how big a problem diabetic foot ulcers are in Australia and around the world.

“It was estimated that in 2019 there were more than 463 million diabetics globally – more than the combined populations of the United States, Australia, the United Kingdom, Canada, and New Zealand.

“The prevalence of diabetes is also rapidly increasing and by 2045 it’s estimated there will be more than 700 million people around the world with diabetes, equivalent to the combined population of America and Europe today. And up to 25 per cent of those people will get an ulcer that could result in amputation.”

But around 85 per cent of diabetes related amputations are preventable if wounds are detected early and managed appropriately. “An amputation is completely life-changing and can have many negative health effects, including further reducing people's mobility and physical activity,” Mr McKenna.

“Sadly, up to eight in every 10 people who have a limb or partial limb amputated due to diabetes will still die within the next five years.”

Mr McKenna has a double degree from QUT in applied science (biotechnology) and business (marketing) and also works as a business analyst evaluating emerging medical technologies.

“Part of my training is to identify strong needs and opportunities for solutions,” he said.

“I was looking for research areas to focus my PhD work on and found out about QUT’s work with diabetic ulcers … there’s a huge need in this area and the proposed solution is super exciting so it was definitely a project I wanted to be part of.”