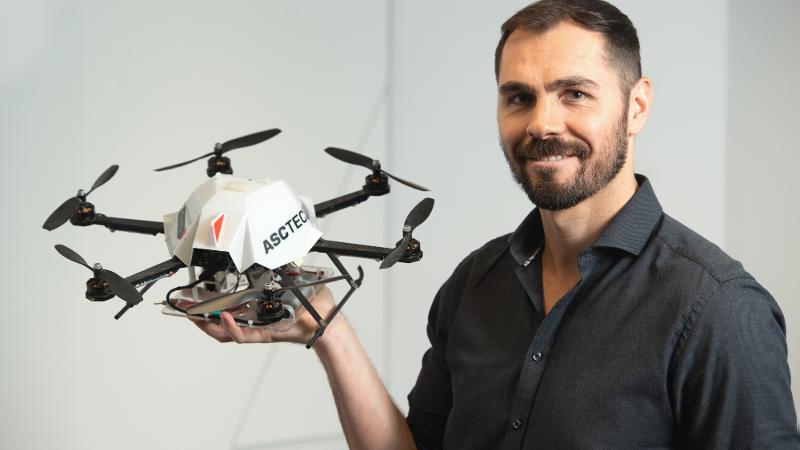 QUT researchers have been awarded an international prize for the development, with industry partners, of Australian Drone Facility Maps that help ensure safe and fast approvals for drone operations in city skies across Australia.

The project, done in partnership with Airservices Australia, received the Airspace Management award in the AirWards.

AirWards, a global award program, was established in the UK to recognise the wide variety of positive uses of drones. Judges in the awards include global leaders, drone experts and industry specialists and categories span a number of industries, including medical and healthcare, emergency response, conservation and environment and agriculture.

QUT researcher Dr Aaron McFadyen, from the QUT Centre for Robotics, who has been awarded multiple research fellowships for his work on drone traffic management, said commercial drone operators were able to participate in a trial to lodge applications for permission to fly a drone near airports through one of several CASA-verified apps.

The apps check the area where the drone operator would like to fly against the facility maps developed under the QUT and Airservices Australia partnership. If the location is safe, operators can get approval in minutes, rather than in weeks under the manual process.

The AirWards judges, in recognising the QUT project, said: “This is a great solution to solving many of the problems associated with traditional airspace approvals … The fusion of software and data to rapidly generate safety risk maps is a well thought out approach to addressing a gap in the industry.”

Dr McFadyen said the award was a great recognition of the partnership between QUT and Airservices.

“This project required researchers, risk analysts through to software developers and more so we appreciate the recognition from Airwards for our achievements and look forward to exciting new developments in the future,” Dr McFadyen said.

“Automation and safety are crucial elements to the successful integration of drones into increasingly busy airspace,” Mr Curran said.

“The facility maps are a great example of innovative thinking and I’m glad to see the work being conducted under the partnership be recognised through the Airspace Management award.”