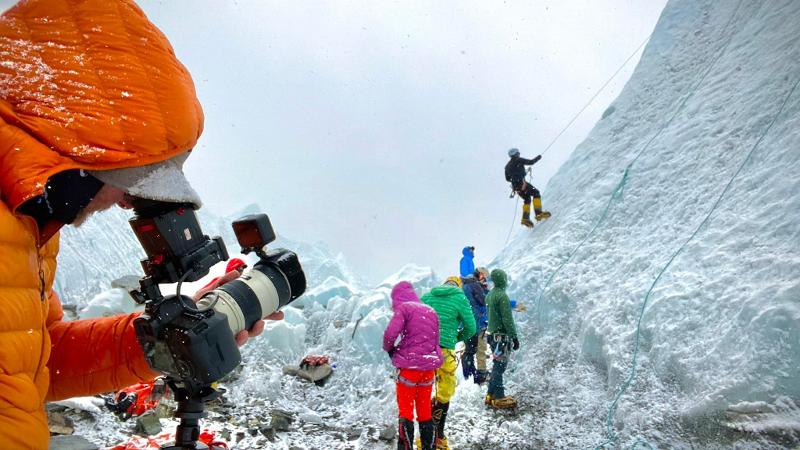 A thwarted attempt by Australian adventurer and mountaineer Ken Hutt to become the first person to legally paraglide off the top of Mount Everest to raise money for Rotary International’s End Polio Now campaign has been placed on ice but his message went all the way to the top.

Accompanied by QUT filmmaker Joe Carter, Mr Hutt spent many weeks at Everest Base camp before starting his journey to the summit earlier this month.

Mr Carter, who coordinates the film and television degree within QUT’s School of Creative Practice and has just submitted his PhD in extreme sports films, said despite 62-year-old Ken being granted the first ever permit to fly from Everest by Nepal’s Tourism and Civil Aviation Authorities, the ever-present dangers of climbing Mt Everest produced an unexpected and devastating hurdle.

“Ken developed a life-threatening chest infection at camp 2 (6400m). Without the ability to breathe properly in an environment where every gram of oxygen inhaled can mean the difference between surviving and death, he had no choice but to descend,” said Mr Carter.

“It’s heartbreaking because Ken had been working on securing the flying permit for more than three years, but it was the only decision he could make. Once you get beyond camp 2, you cannot get medical aid or be rescued.

“While we were there three other climbers died on Everest and two climbers from Ken’s team who did make the summit, where they took his End Polio Now message, were airlifted out in medical emergencies on the way down.”

Despite the outcome not being what he hoped for, Mr Carter’s Fly from Everest documentary will still be completed as a research film that doubled as an opportunity test the creative practice in extreme conditions at extreme altitude. And, like Ken, he believes the mission succeeded in raising funds and awareness.

“It was a dream come true, after all the obstacles we faced, to finally receive the permit to launch the glider with the blessing of local authorities,” said Mr Hutt, who will be welcomed by the Australian Ambassador to Nepal Her Excellency Felicity Volk at a special Aussie BBQ today at the Embassy in Kathmandu in celebration of his efforts tin raising funds and awareness for Rotary International’s global campaign to End Polio Now.

“Although we didn’t get to launch the paraglider from Mt Everest, we have still managed to succeed with our goal. Three other Brazilian climbers in our team (Joel Kriger, Gabriel Bassanesi and Ludmila Lucas) made it to the summit and carried the EndPolioNow banner with them which was amazing and humbling, since every gram of extra weight feels huge when you’re above 8,000 metres.

“We have already raised more than $250,000 for Polio with the expedition, and our thousands of followers on social media around the world have been sending messages of support and relief that our whole team has made it safely down.”

Polio is a highly infectious viral disease that largely affects children under 5 years of age and can cause long-term disability, paralysis and death. In 1988, when the Global Polio Eradication Initiative was launched, polio was present in more than 125 countries. Due to immunisation of almost three billion children since then, wild polio is now found only in Afghanistan and Pakistan.

Mr Carter stayed at base camp with Ken and his team from early April, shooting footage for his documentary and training the support crew in how to help film the attempted flight from Everest.

“Hearing on the radio that Ken had fallen ill above Camp 2 was devasting for the whole team, with all of us worried for his safety,” he said.

“Our whole support team waited for Ken and lead guide Lopsang Sherpa at ‘Crampon Point”, the last place non-climbers can reach at the base of the notoriously dangerous Khumbu Icefall. Ken’s son Matt was with us, and the relief we all felt when they finally emerged from the Icefall was indescribable.”

Mr Carter has spent the last decade researching extreme sports films and now faces the challenge of creating a gripping documentary of a mission that didn’t quite go to plan.

“This Everest film began as almost the ultimate extreme sports film but with a twist – the awareness and fundraising for Polio by an inspiring individual. It’s not about some death-defying stunt,” he said.

“So, to have a storyline now where Ken was forced to retreat from the mountain without achieving the summit or the paragliding flight is not necessarily a sad ending – in fact, seeing Ken reunited with his son at basecamp, and the knowledge that he has achieved so much for Rotary’s EndPolioNow campaign and is going home to his family is actually a heart-warming and inspirational way to end our story here.

“The dream lives on – to fly the message about Polio from the top of the world, and Ken’s courage and determination has brought us an authentic and epic human story which will make for an amazing conclusion to a unique documentary film.”

For Media Use: All images, film, music and graphics are with permission and licences for media use