Poet lays bare heartache and beauty of life and death 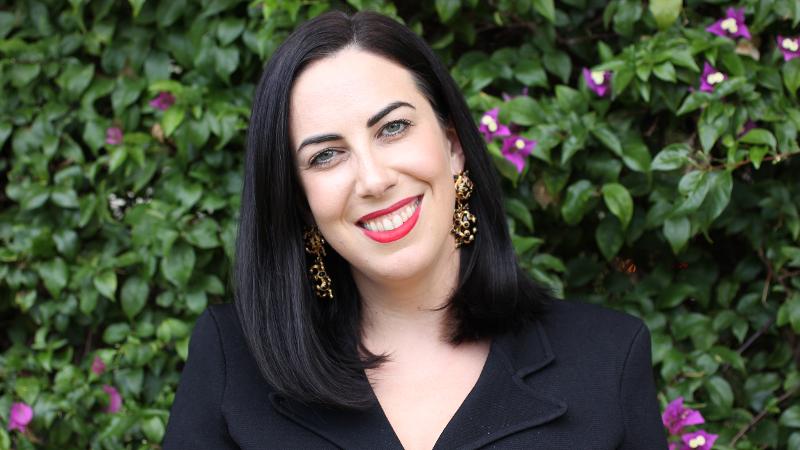 She is one of Australia’s most lauded poets and in recent years made headlines as an advocate for aged care reform, following her father’s experiences in his final years. Now QUT’s Professor Sarah Holland-Batt has channelled her talents into a powerful new collection questioning what it means to be mortal.

Described by two-time Miles Franklin Award winner Michelle de Kretser as ‘a tour de force’ that will ‘leave you dazzled and devastated’, The Jaguar (UQP) was born out of the grief Professor Holland-Batt experienced over her father’s death due to Parkinson’s Disease, and the transformations of his personality and memory during his long decline.

The Jaguar is already attracting rave reviews for Professor Holland-Batt, who teaches Creative Writing in QUT’s School of Creative Practice. The Australian notes that “the poems about her father are among some of the most powerful written on this subject and many readers will be profoundly affected by them.” The Guardian describes the poems as a “confronting and heartfelt elegy, capturing his humanity, his illness and her loss with clarity and love.”

“The Jaguar asks readers to contemplate what it means to age, and the moments of terror and grace we feel when our loved ones are in that vulnerable state,” Professor Holland-Batt said.

“We often resist imagining ourselves growing old and vulnerable, because it’s confronting, and sometimes even frightening. But we owe it to our elders to imagine their experiences, and to have empathy and care for them, just as they’ve cared for us.” An internationally renowned, award-winning poet, editor, and critic, Professor Holland-Batt won the 2016 Prime Minister’s Literary Award in 2016 for her second book of poetry The Hazards (UQP), and recently wrote a weekly column on poetry for The Australian.

Last year she became the first poet appointed as the Judy Harris Writer in Residence Fellowship at the Charles Perkins Centre at the University of Sydney, an honour offered annually to a distinguished Australian writer whose work offers a literary perspective on health and chronic disease.

Professor Holland-Batt’s present research focusses on literary and media representations of ageing, and on amplifying the perspectives of older Australians in residential aged care. She is also a prominent advocate for reform of Australia’s aged care system, writing and commenting on aged care matters for outlets including The Guardian, 7:30, Q&A, ABC News and The Australian.

“Our current aged care system is all too frequently inhumane and driven by profit over basic human decency. All older Australians deserve safe and dignified care as they age.”

The Jaguar, which includes several poems previously published in The New Yorker, boldly challenges the reader to bear witness to the profound and tender moments at the end of life.

The book, which begins and ends with powerful elegies devoted to her father, reinforces Professor Holland-Batt’s status as a poet in a class of her own, as well as an advocate for change, and a voice for our most vulnerable.

In the garden, my father sits in his wheelchair
garlanded by summer hibiscus
like a saint in a seventeenth-century cartouche.
A flowering wreath buzzes around his head—
passionate red. He holds the gift of death
in his lap: small, oblong, wrapped in black.
He has been waiting seventeen years to open it
and is impatient. When I ask how he is
my father cries. His crying comes as a visitation,
the body squeezing tears from his ducts tenderly
as a nurse measuring drops of calamine
from an amber bottle, as a teen at the car wash
wringing a chamois of suds. It is a kind of miracle
to see my father weeping this freely, weeping
for what is owed him. How are you? I ask again
because his answer depends on an instant’s microclimate,
his moods bloom and retreat like an anemone
as the cold currents whirl around him—
crying one minute, sedate the next.
But today my father is disconsolate.
I’m having a bad day, he says, and tries again.
I’m having a bad year. I’m having a bad decade.
I hate myself for noticing his poetry—the triplet
that should not be beautiful to my ear
but is. Day, year, decade—scale of awful economy.
I want to give him his present but it is not mine
to give. We sit as if mother and son on Christmas Eve
waiting for midnight to tick over, anticipating
the moment we can open his present together—
first my father holding it up to his ear and shaking it,
then me helping him peel back the paper,
the weight of his death knocking,
and once the box is unwrapped it will be mine,
I will carry the gift of his death endlessly,
every day I will know it opening in me.

First published in The New Yorker

The Jaguar (UQP) is out this week. Images available via: https://brand-centre.qut.edu.au/bms/?link=9230D1E5