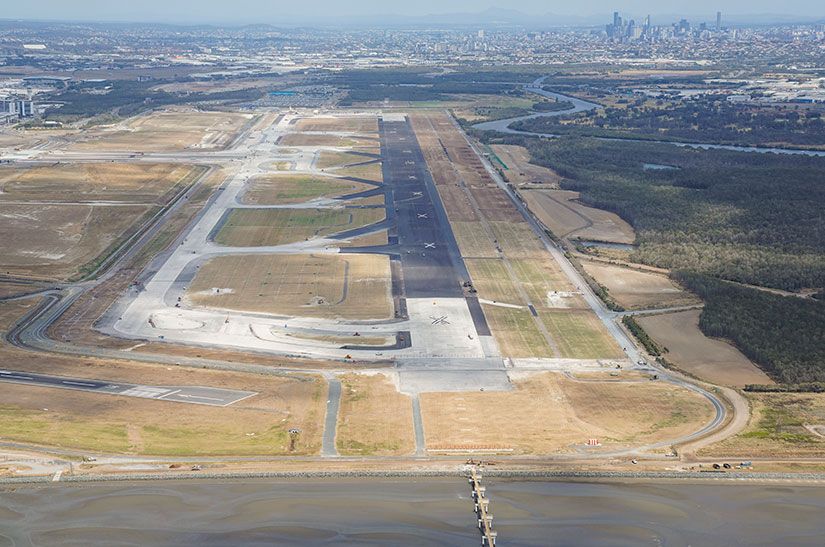 After nearly 15 years as Project Director, you would be wrong to assume that I have lost any enthusiasm or passion for this project. After all, Brisbane’s new runway (BNR) is a once in a lifetime venture – an engineering and logistical marvel being executed at a scale rarely seen in Australia – a project I have been lucky enough to be a part of from the very start.

There are many things to be passionate about when discussing the new runway. It is the fruit of the incredible foresight from all levels of government many decades ago. It is the future of our great city and state, designed to give Brisbane the greatest capacity of any airport in Australia. And while traditional in the pavement design sense, Brisbane’s new runway is incredibly forward-thinking and ambitious in other facets, with a deep level of environmental sustainability incorporated throughout all stages of construction.

It is incredibly inspiring to work for a company that places such an emphasis on sustainable development and operations. Brisbane Airport Corporation (BAC) is committed to world best practice in environmental sustainability, understanding that it extends well beyond rigid compliance with all relevant government regulatory standards and controls. As a business, we believe we can operate in a way that doesn’t compromise the environment nor sacrifice commercial outcomes, and this belief is carried through to BNR.

When Malcolm Fraser delivered his election speech in November 1977, he made a promise to bring Brisbane’s airport up to international standards. Three years later, he turned the first sod as Prime Minister, marking the commencement of the construction of the new Brisbane Airport as we know it today. It is worth noting that throughout the construction of the existing runway, cross-runway and associated taxiways in the 1980s, a large casuarina plantation was purposefully established across the BNR site and surrounding areas to stabilise the ground and discourage colonisation by birds and other fauna. More foresight.

Fast-forward to 2007, the combined Environmental Impact Statement and Major Development Plan (EIS/MDP) for BNR was approved for BNR following an intensive two-and-a-half-year environmental assessment and public engagement process. Prior to commencing construction, BAC developed a comprehensive Construction Environmental Management Plan (CEMP) that was included in the Request for Tender process and the final contract, providing a practical plan of environmental management measures for contractors to deliver.

Civil works, dredging and reclamation of the 360-hectare site commenced in 2012. Two major new drainage systems, the Kedron Brook Floodway Drain to the south and the Serpentine Inlet Drain to the north, were constructed to manage stormwater drainage for the new airfield. During the major drainage works, more than 300,000 cubic metres of acid sulphate soils (ASS) were excavated from the site. No material was transported off-site. The soils were treated in purpose-built lime treatment pads, validated, and then reused to form the ‘reclamation bund’ that enclosed the entire site footprint which allowed the dredged water to be captured, treated and tested prior to being discharged back into the Kedron Brook Floodway.

A large part of BAC’s environmental sustainability lies in its biodiversity conservation. Brisbane Airport is one of the last remaining populations of the Lewin’s Rail – a small ground-dwelling bird that is protected under the Nature Conservation Act 1992. With works occurring through the Lewin’s Rail habitat area, BAC undertook the conversion of an 11-hectare site, clearing the casuarina and replacing it with grass species that provide a more suitable habitat for the Lewin’s Rail. All of the cleared casuarinas were then mulched on-site and reused in a number of ways:

Arguably one of the most impressive elements of environmental sustainability incorporated within the BNR project is the dedicated seven-kilometre pipeline that runs from Queensland Urban Utilities’ Luggage Point Sewage Treatment Plant to the BNR site. Recycled water is pumped to the new runway site, where it is stored in dams prior to use in concrete production and irrigation. It’s more than a drop in the ocean, with 1.2 billion litres of potable water saved – enough to fill more than 500 Olympic-sized swimming pools.

Throughout the entire process, there has been continual engagement with regulatory agencies in relation to airspace and emissions, dredging and coastal processes, ecology and water quality, cultural heritage, and socio-economic impacts.

Does all this make the new runway more profitable? No. But it does demonstrate a deep understanding of the long-term cost of major infrastructure, and the role we can and should play as part of a larger ecosystem.

Embracing environmentally sustainable practices can have a number of significant benefits for business. By necessity, sustainable businesses often become more innovative, as they constantly try to find new solutions. In contrast, other organisations may simply stick with what has worked in the past, without considering better and greener alternatives. Employees are more invested in an organisation that aligns with their own values, and a recent survey found that 64 per cent of millennials considers a company’s social and environmental commitments when deciding where to work.

More importantly, though, consumers care. As awareness around environmental issues increases, consumers are adjusting their shopping habits. As a recent Nielsen report concluded, “Sustainability is no longer a niche play: your bottom-line and brand growth depend on it.”

I am proud to have been part of such an iconic development in Brisbane’s history – but even more, I am proud of the way in which it has been sustainably delivered. Brisbane Airport has led the way, and I look forward to this level of environmental sustainability becoming industry standard for large infrastructure projects into the future.