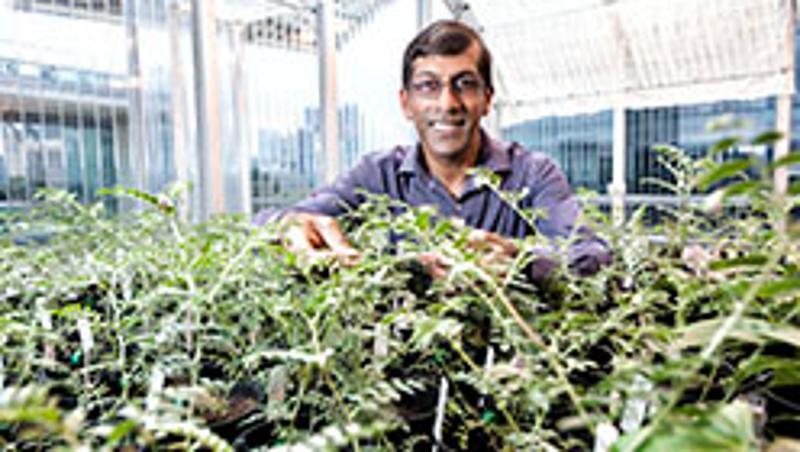 Australian agricultural industry and government leaders who met at QUT yesterday were told plant biotechnology holds the key to enabling Queensland the state to become a food bowl for India and Asia.

Professor Sagadevan Mundree, the director of QUT’s Centre for Tropical Crops and Biocommodities  said new varieties of chickpea and mungbean currently in field trial were achieving a 20 per cent increase in harvest index even though they were being given minimal water.

“This fantastic result potentially opens the door to the wide-scale cultivation of drought tolerant pulses, in areas currently considered too arid for farming,” he said.

“Only one per cent of Queensland is currently under cultivation but science can help change that, not only boosting farmer and government export incomes but enabling Australia to play a larger part in the humanitarian crisis climate change is causing in India and other regions.

Professor Mundree said India had been struggling with drought in recent years and this had reduced the nation’s chickpea and mungbean crops, leading to increased imports from Australia.

“Australia is the world’s largest exporter of chickpea and 65 per cent of the crop, grown in Queensland, is worth $441 million to this state’s economy,” he said.

“The mungbean industry, 98 per cent of which is based in Queensland,and currently worth around $120 million, has more than trebled in value in the past decade.

“Demand for Australian pulses is being driven not only by the harsh impacts of climate change occurring elsewhere in the world but also by the human need to consume plant-based protein.

“The prohibitive cost of meat in many societies and the vegetarian nature of others will ensure pulses become an even more significant source of protein in many countries well into the future.”

Professor Mundree said the drought-tolerance and disease resistance results were achieved by transferring the gene from a native Australian ‘resurrection’ plant, which is also tolerant of salt and extreme heat, into chickpea plants resulting in significant tolerance to biotic and abiotic stresses.

“The gene from the ‘resurrection’ plant essentially tells the chickpea plant to ‘hang in there’ when conditions are dry, whereas most plants will start to give up when they lose 40 per cent of their water," he said

Professor Mundree added that drought and disease resistance was one of five key pillars of research currently achieving significant results.

"The genetically elite chickpea varieties developed are also resistant to the disease Botrytis cinerea, which is a grey mould that infects chickpea.  We have also developed chickpeas with iron content five times higher than current varieties," he said.

“This increased iron content is hugely significant when you consider that 54 per cent of women across much of India are severely iron deficient, and similar profiles exist across the globe.”

Professor Mundree said an improved mungbean breeding program, which involved the world-first genetic mapping of a diverse range of mungbean lines, had also been developed in close collaboration with the Department of Agriculture and Fisheries in Queensland.

“This resource is now being used AVRDC, the World Vegetable Centre based in Taiwan, which aims to alleviate malnutrition and poverty in the developing world though the increased production and consumption of highly-nutritious crops,” he said.

“The development of this resource places Queensland internationally at the forefront of mungbean breeding leadership."

Professor Mundree said it was very pleasing to deliver such firm results in 2016, the United Nations International Year of Pulses.