Protecting Australia’s environments needs citizens to get back to nature 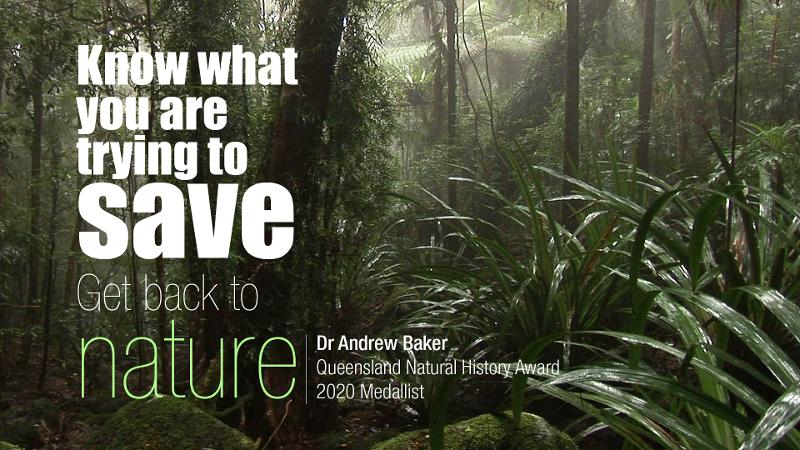 An ecology and environmental science expert at QUT, Dr Baker is known internationally for his discovery of five new species of antechinus – mouse-like mammals that sex themselves to death.

Know what you’re trying to save

Joining dedicated nature groups or societies, or even just regularly getting outside to experience nature, are some easy ways Australians can familiarise themselves with the environment and related issues, according to Dr Baker.

“More familiarity engenders a broader and ongoing interest in making sure our environments are protected, and I encourage everyone to be as involved as much as possible.

“If we protect the environment, we nurture not only our native species but humanity as well.

Dr Baker is no stranger to appealing for public interest to lobby for the classification of threatened species and improving conservation measures having generated national and international media interest in the marsupials.

Two of his new antechinus species have been listed as federally Endangered and are currently threatened with extinction from drought and bushfires.

Measuring the impact of recent bushfires

Dr Baker said it was too early to assess the impact of the recent Springbrook, Lamington and Bulburin drought and bushfires on small mammal communities.

His research team will return in winter to determine the status of antechinus populations using detection dogs at Springbrook and Bulburin National Parks – areas where the endangered species have previously been found.

Both antechinus species were only discovered in 2013-2014. Now, only a few years later, he fears they are already on the slippery slope towards extinction.

The QNC board presented Dr Baker with his award at its annual general meeting on 17 February, along with a medallion featuring Bunya Pine Araucaria bidwillii – a tree endemic to Queensland.

The QNC is one of more than 50 naturalist clubs within the Australian Naturalist Network.

“Our activities help to document the distribution and abundance of plant and animal species.

“This type of information is essential for evaluating the status of populations.

“Our publication provides a medium where these observations can be documented and distributed to other interested bodies, scientists and ecologists.”

Dr Baker said he was humbled and honoured to be recognised with the award.

Among previous award recipients is Dr Baker’s mentor, the late Jeanette Covacevich AM, herpetologist and senior curator of vertebrates at the Queensland Museum who described more than 30 species in various genera, and who was perhaps most famous for describing the Inland Taipan, the world's most venomous land snake.

Dr Baker himself has described numerous mammal species in several genera and is an award-winning writer and illustrator.

He has published a broad suite of research journal and popular works on natural history of Queensland mammal fauna.

Dr Baker is co-editor of the Field Companion to the Mammals of Australia (New Holland: 2013) and wrote the dasyurid chapter of Volume 5 (Marsupials) in Handbook of the Mammals of the World (Smithsonian / Lynx Edicions, 2015; Winner of the 2016 Whitley Medal).

He is principal co-author of a recent popular science book on the Secret Lives of Carnivorous Marsupials (CSIRO 2018), which was Highly Commended in the prestigious 2019 Royal Zoological Society of New South Wales Whitley Awards.

He is preparing as co-editor a new edition of the premier Australian mammal reference text: Strahan’s Mammals of Australia 4th Edition (New Holland). Andrew is also author of a book on philosophy of science (Questions of Science: 3rd edition, 2012, Pearson).

He sits on the Australian Mammal Society Committee and is a member of the international IUCN SSC Australasian Marsupial and Monotreme Specialist Group.