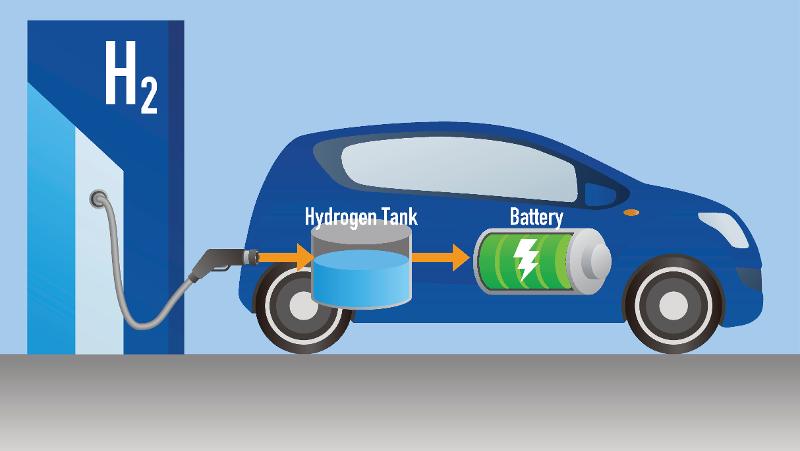 Hydrogen-powered cars will be added to the Queensland Government’s vehicle fleet to accelerate the state’s drive towards a hydrogen-fuelled future.

“We’re ensuring Queensland is at the forefront of renewable hydrogen production in Australia,” Ms Palaszczuk said.

“Globally, the race is on for hydrogen to be a new way of transporting clean energy that can provide secure jobs, new industries and export earnings,” Ms Palaszczuk said.

“Last year on a trade mission to Korea I discussed the potential for Queensland’s hydrogen industry and now we are seeing it become a reality.”

The Premier also announced the appointment of a strategic hydrogen advisor – QUT’s Professor Ian Mackinnon (bio below) - at the Government’s Hydrogen Forum in Brisbane this morning, attended by over 100 industry representatives from around Australia.

Minister for State Development Cameron Dick said renewable hydrogen had long been possible, but conditions were now more favourable for this industry to develop.

“Queensland’s established infrastructure, first-class export facilities and abundant solar resources and land mean we are well-positioned to be the global partner of choice for hydrogen industry and investment opportunities,” Mr Dick said.

“I congratulate Professor Mackinnon on his appointment and look forward to working together to create more jobs for Queenslanders as we transition to low-carbon energy sources.”

“The trial of the first FCEVs, which emit only heat and water while driving, is also an exciting initiative.”

Minister for Housing and Public Works Mick de Brenni said the FCEVs were a logical addition to the Government’s renewable energy, job-creating agenda.

“The FCEVs are a highly visible way that we can demonstrate the range of applications of renewable hydrogen and raise community awareness about the safe and sustainable use of hydrogen,” Mr de Brenni said.

“We are looking forward to including Hyundai and Toyota vehicles in the trial as they are at the forefront of fuel cell technology.”

Hyundai Senior Manager Scott Nargar said the company was delighted to be working with the Queensland Government to showcase the many benefits of hydrogen-powered transport.

“We're excited to see the commitment of the Queensland Government to a clean transport future and look forward to our hydrogen fuel cell vehicle, the NEXO driving on Brisbane roads soon.”

“The adoption of hydrogen-based solutions aligns with Toyota’s commitment to show the benefits of FCEVs to the general public and bring zero CO2 vehicles such as the Toyota Mirai to the Australian market in the future,” Mr Macleod said.

Minister Dick said BOC would supply the renewable hydrogen to fuel the vehicles and install a hydrogen refuelling station at QUT, Brisbane.

“The Palaszczuk Government has been working with BOC and QUT to deliver both the renewable hydrogen plant at Bulwer Island and the development of a hydrogen vehicle refuelling station in Brisbane, which will allow the FCEVs to be integrated into QFleet,” he said.

QUT Vice-Chancellor and President Professor Margaret Sheil AO said the university was committed to supporting renewable hydrogen development as part of a suite of approaches to providing for the world’s future energy needs.

“As a learning institute, it is our mission to help equip the workers of tomorrow to safely produce, handle and use renewable hydrogen and related technologies.”

Managing Director of BOC South Pacific John Evans said the company was proud to leverage its hydrogen expertise and existing infrastructure to facilitate the introduction of hydrogen as a zero emissions fuel.

“We congratulate the Queensland Government on its commitment to trial FCEVs across its fleet and look forward to establishing world-class production and refuelling facilities that support the emerging hydrogen economy in Queensland,” Mr Evans said Professor Mackinnon is the founder and former Executive Director of the Institute for Future Environments (IFE) at QUT; an initiative that supports transdisciplinary RD&D directed at solving the challenge of our time: to sustainably live in, and adapt to, a resource-constrained world that is undergoing rapid and complex change globally.

Professor Mackinnon was previously a senior executive at the Australian Research Council (ARC), one of Australia’s leading research funding agencies. At the ARC, he was Executive Director for Engineering and Environmental Sciences and directed the Linkage Projects Scheme – a program supporting outcome-focused, collaborative research between universities. Professor Mackinnon was responsible for the critical assessment of proposals and entities that delivered more than $300 million of taxpayer funds per year to the Australian research community.

Professor Mackinnon has more than ten years’ experience in technology transfer, including direct involvement with two start-up companies as well a serving on numerous boards.

Professor Mackinnon began his career at James Cook University (JCU). He undertook post-graduate research in crystallography and mineralogy at JCU and at ANSTO, Lucas Heights, through an AINSE Fellowship. Professor Mackinnon has held appointments at Arizona State University, NASA Johnson Space Centre and The University of New Mexico in the USA. He returned to Australia to establish the Centre for Microscopy and Microanalysis (CMM) at The University of Queensland (UQ) as Foundation Director and then with promotion to Professor in 1995.

Throughout his career, Professor Mackinnon has developed infrastructure and tools for cutting-edge research or technology demonstration, much of this achieved in Queensland. He has built or had oversight of more than eight different pilot plants, responsibility for installation of more than 25 electron-optical columns and facilitated development of a new technology for the minerals industry that is now installed in more than 50 sites worldwide. Professor Mackinnon was deeply involved in the team that delivered QUT’s Science and Engineering Centre and, since 2009, has been instrumental in the collaborations to establish the IFE, the Cube, CARF, Banyo Pilot Plant Precinct and other research infrastructure for the STEM disciplines at QUT.

Professor Mackinnon’s current RD&D interests are focused on the synthesis, characterization and modeling of high performance materials for use in the energy, transport and environmental sectors. These materials include boron-based compounds, perovskites, zeolites and clays.