Rare award for protecting $2.4B export industry from fruit flies 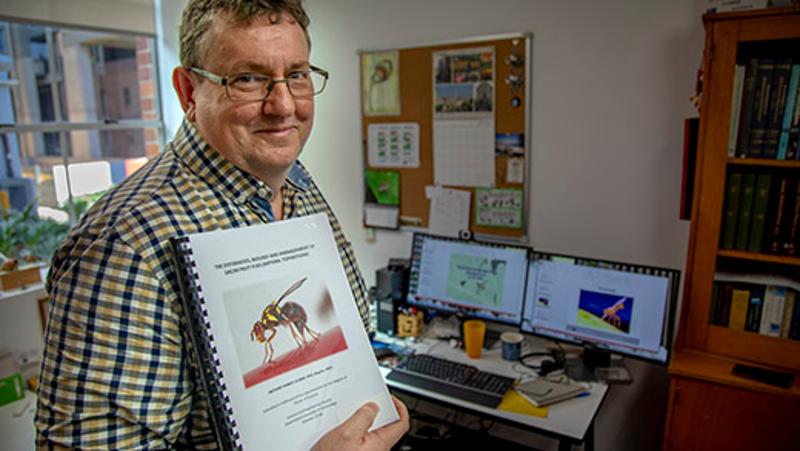 He’s an old hat at graduating, but Professor Anthony Clarke will gain a new one in July when he dons a golden cap and gown to receive a rare Doctor of Science (DSc) award from QUT – the first awarded by the institution in 10 years.

A world-renowned fruit fly researcher, Professor Clarke will receive the rare merit specifically for research on the biology and management of fruit flies in the genera Bactrocera and Zeugodacus – flies native to Asia, Australia and Pacific - on which he has published more than 80 research papers over a period of 20 years.

The problem with fruit flies

Fruit flies lay their eggs directly into fruit hanging on the plant, where maggots then hatch and feed. If uncontrolled fruit flies can destroy 20-100% of a crop.

Over 75% of Australia’s fruit and vegetable exports (~$2.38Bill) are susceptible to fruit fly.

Horticulture is Australia’s third largest agricultural industry valued at $13.2B (2018) and employing more than 600,000 people.

In 2015, Professor Clarke chaired the writing of Australia’s National Fruit Fly Research, Development and Extension (RD&E) Plan – a response to banned insecticide use due to environmental damage and consumer health concerns.

The plan outlined strategies and recommendations, including future research, for protecting horticultural industries from both exotic and endemic pests.

“Some horticultural sectors were unprepared for the withdrawal of the insecticides, which had no equivalent replacements.

“Given our fruit fly problems, Australia has to consider and utilise multiple alternative controls such as Sterile Insect Technique (SIT), Male Annihilation Technology (MAT), protein bait spray, quarantine, and natural enemies like parasitoids – the larvae of these little wasps eat fruit fly maggots from the inside out.” 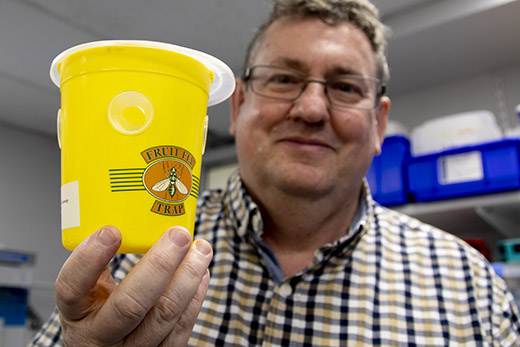 Addiction could be a promising candidate for future pest control and one of an ongoing investigation.

“While insects look different, physiological processes are often very similar to larger animals (mammals). For example, how the nervous system operates is basically the same.

“Male fruit flies are attracted to organic chemicals produced by a small number of plants. They ingest the chemical which, in some species of fly, is broken down and incorporated into male pheromones that make the males more attractive females.

The finding has potential application to lure and bait techniques, where these chemicals mixed with insecticide attract and kill fruit flies.

Work done at Macquarie shows it can also speed growth rates of lab-grown fruit flies used in SIT, which relies on mass rearing sterile male fruit flies that breed with wild female populations so those females produce no offspring. 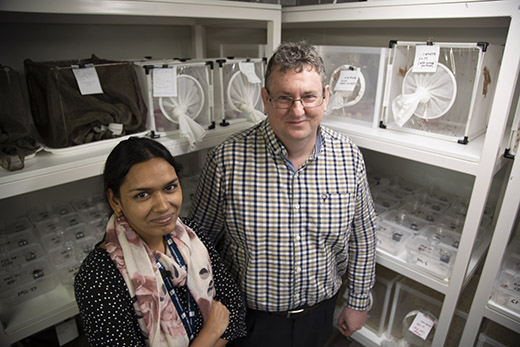 A focus on tiny insect yields high output and impact

Fruit fly biology, diagnostics and control are the subjects of Professor Clarke’s book Biology and Management of Bactrocera and Related Fruit Flies, to be published by CAB International in August-September.

“This book will be the first general text available for someone who is new to working with fruit flies.”

Professor Clarke said fruit fly research in Australia and Asia was globally significant and although his work extends to other insect species, it was a focus on the fruit flies of this region which earned him the Doctor of Science award.

“A Doctor of Philosophy (PhD) requires between three and five research publications. My Doctor of Science application included about 80 papers on one subject.

“I made a strategic decision to specialise on fruit flies as a mid-career research, after having done earlier research in field crop entomology, forest entomology and theoretical insect ecology.

“When you are spread thinly you only get to ask superficial questions - particularly in entomology where we know so little about most insects – so I made a choice to focus.

While a supporter of fruit fly control in production situations, Professor Clarke also advocates the insects’ as an important part of natural ecosystems.

“Fruit flies are endemic rainforest insects, the only known pollinator of some orchids and possibly a key participant in assisting seed dispersal and germination for many rainforest plants.

“For any fruit to germinate it needs to be stripped of fruit flesh. For example, tomato seeds are covered in a clear gel which inhibits germination.

“Infested fruit is also preferred by vertebrate seed dispersers like birds, bats and small rodents – they like fruit with maggots in it.

“Birds were shown to disperse 85 per cent of fruit in a Singapore study.

QUT will confer the Doctor of Science award during July graduations, which Professor Clarke will attend with immediate family.