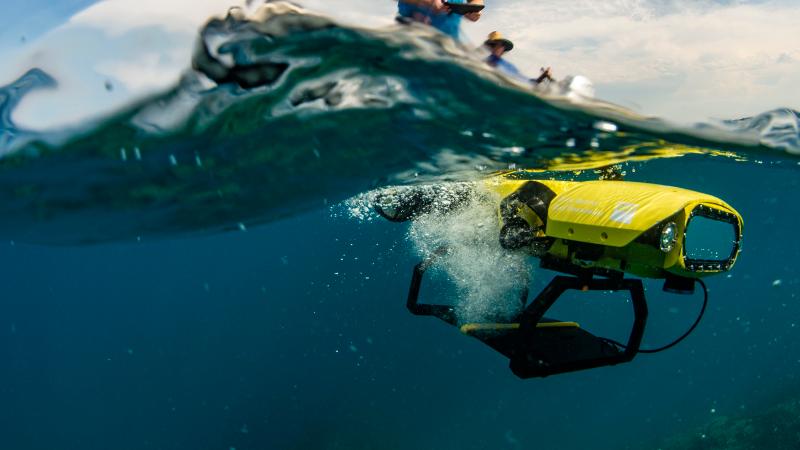 The project is a world-first demonstration to adapt technology, like the underwater autonomous drone RangerBot, to give nature a helping hand in the restoration of the Great Barrier Reef.

The project kicked off a few days after the November full moon coral-spawning event.

The project team harvested millions of the spawn from Moore Reef, off Cairns, using giant ‘collection’ nets on the water’s surface.

They were then transferred to smaller floating enclosures where the spawn grew into larvae (baby corals).

Five days later, when the larvae were mature enough to resettle, Professor Dunbabin loaded flexible bladders, each carrying over 200,000 coral babies, into a custom deployment system attached to his RangerBot, and sprinkled the larvae onto nearby damaged reefs.

A successful spawning was not only vital for this project, but also shows the reef has potential to recover from the back-to-back bleaching events of 2016 and 2017.

Professor Dunbabin said there was a real to need to scale up this restoration work to make a real difference to reefs around the world, and robotics could provide the extra eyes, hands, and speed to get there.

‘When we were building RangerBot, we used to call it the Swiss Army knife—the tool that can do many things,’ Dunbabin says.

‘With this project, RangerBot really came into its own ‘

‘While coral larvae were maturing in the floating nurseries, RangerBot was out mapping the seafloor and coral cays to find suitable resettling sites around Arlington and Vlasoff Reefs—areas badly hit by last year’s bleaching.’

‘Then once the larvae were ready, RangerBot was repeatedly loaded up deployed.’ ‘Imagine a little cloud of smoke coming out the back,’ Dunbabin said.

‘That’s the larvae being pushed out by the robot as it [swims] over. It’s basically like gently spreading grass seed over newly prepared soil.

Over the coming months and years, the new coral colonies will be checked by researchers and RangerBots to measure success.

However, this was just the first, and actually smallest demonstration planned for the project.

As part of this project, Professor Harrison and Dr Dunbabin will construct ‘mega’ spawn catchers to massively upscale larvae capture and the restoration work in the 2019 spawning using multiple LarvalBots to precision deploy the larvae on other damaged reefs.

Deploying RangerBot for this year’s spawn is a good example of how diverse backgrounds and the power of technology can come together to spark innovative solutions to global problems.

“We’ve got to at least try this technique,” Dunbabin says, “and if it’s as successful as we think it will be, then we can do some good things for reefs around the world. We can’t wait another year.”

The project secured funding through winning Great Barrier Reef Foundation’s Out of the Blue Box Reef Innovation Challenge to bring the idea to life.

It builds on the development of the RangerBot and its predecessor, the COTSbot (Crown-of-Thorns Starfish robot), both of which were generously supported through donations from QUT alumni, the Dalio Foundation, the Eldon and Anne Foote Trust, and a partnership between QUT and the Great Barrier Reef Foundation that won the 2016 Google Impact Challenge.