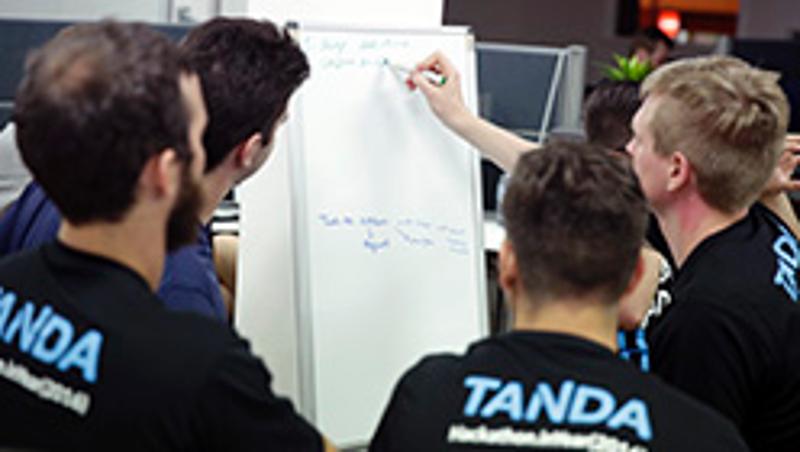 Tanda, a time and attendance software company founded by four QUT alumni, is creating innovation and design opportunities for students in a move to give back to the programming community.

Their Annual Hackathon, held from 22 to 23 April, was largest to date in Queensland, and brought together the next generation of programmers to learn about APIs (application program interfaces), which allow users to build their own apps and businesses around existing companies’ applications.

The event celebrated the launch of Tanda’s public API, and was a unique opportunity for programmers to meet fellow developers and IT market leaders, using their skills in a real life setting with real data to produce an idea that could be sold or developed into a business.

Tanda Co-Founder and QUT alumnus Alex Ghiculescu said the company was inspired to give back to IT students and industry professionals because of the ‘art’ that could be created through innovation and collaboration.

“The hackathon is so important because it provides a chance for students in the programming community to get together and bounce ideas off each other. It’s a really fun atmosphere to be a part of – you can literally see the sparks flying as people get excited about their ideas!”

“We started Tanda because the four of us got together and built something cool, but we couldn’t have gotten far without platforms to build on – that’s what we want to do for others,” said Alex.

Alex said the event was also an opportunity to give back to local university clubs and societies he loved so much at university.

“Forty percent of every ticket sold went directly back to local university IT and programming clubs and societies – it’s a bit sentimental for me actually,” said Alex.

The winning team created workplace wellbeing web app Project 4, which links Fitbit data to Tanda’s rostering platform, tracking employee activity throughout the day and rewarding employees by how active they are during shifts.

Hackathon participant and co-creator of Project 4, Roy Portas said the event was a great chance to learn something new, and gain some experience.

“Being a uni student, I don’t have a lot of time during the week, so being able to come in for the weekend and learn all about APIs in a hands-on environment was fantastic”

“We wanted to create something that could combine Tanda’s API with the Fitbit API to motivate employees at work, but also provide managers with data about their business such as which hours are actually the busiest, based on the movement on employees,” said Roy.