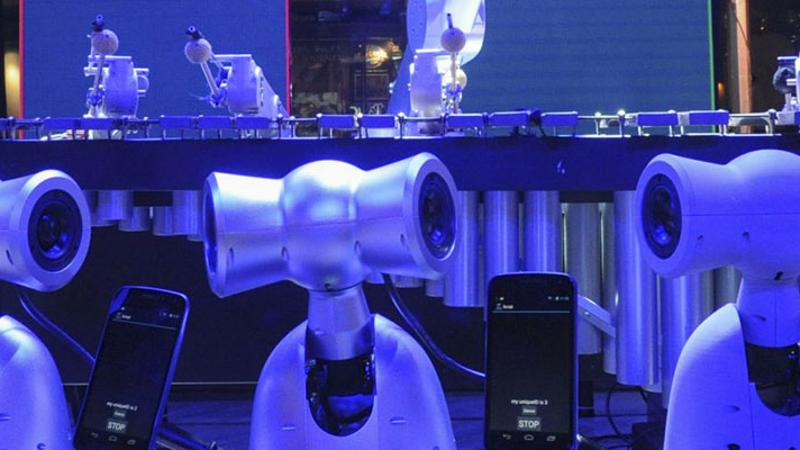 For the first time in Australia, Shimon Robot & Friends will delight audiences with its combination of human, cyborg and robot musicians. This spectacularly unique performance features Shimon, an improvising robotic marimba player that creates inspiring musical interactions with humans. Shimon listens to, understands, and collaborates with live musicians.

Shimon uses artificial intelligence and creativity algorithms to push the boundaries of musical experiences to uncharted domains. Joining Shimon will be a number of other robotic musicians and musical cyborgs developed by Georgia Tech's Robotic Musicianship group in Atlanta, USA. Shimon Robot & Friends aim to combine human creativity, emotion and aesthetic judgment with the algorithmic computational capability of computers. Their goal is to allow human and artificial players to creatively collaborate, building upon each other's ideas.

Shimon Robot & Friends have performed with human musicians in dozens of concerts and festivals from DLD (Munich), to the US Science Festival (Washington DC), Google IO (San Francisco), TED, CNN, The Colbert Report, The Today Show, and the John F. Kennedy Center for the Performing Arts (Washington DC). The Robotic Musicianship Group at Georgia Tech Center for Music Technology aims to facilitate meaningful musical interactions between humans and machines, leading to previously uncharted artistic expression with each party's unique strengths.

Following the performance demonstration there will be a Q&A with the researchers who have developed this ground breaking technology.