QUT researchers have played a key role in a surprising discovery by the NASA’s Perseverance rover mission that lava once flowed at the site of an ancient lake on Mars. 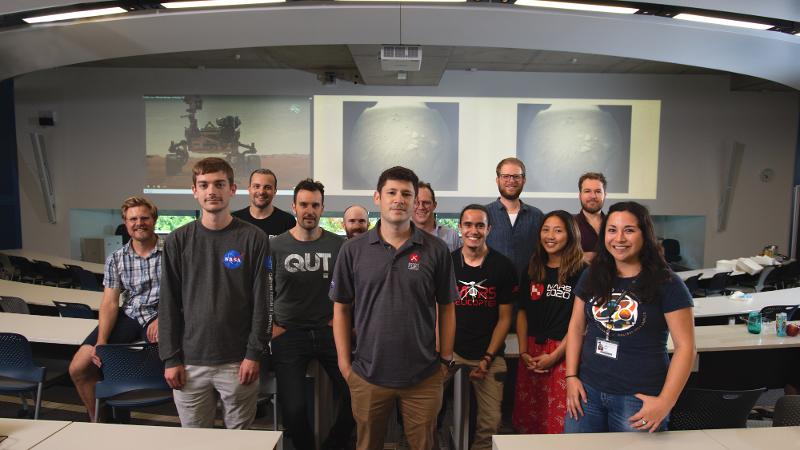 The QUT research team, led by Dr David Flannery and including Professor Balz Kamber, Dr Michael Jones and Dr Luke Nothdurft, contributed to the analysis which led to the announcement at the American Geophysical Union conference this week that the rock the rover has been driving over since landing in February likely formed by volcanic lava flows.

Along with contributing to the analysis of the rock that resulted in the discovery about the surface of Mars, the QUT researchers also developed the software used to analyse the scientific data.

Dr Flannery is a member of the Perseverance science team, a Long-Term Planner for the mission, and a Co-Investigator for PIXL  - a rock chemistry instrument aboard the rover.

Perseverance Project Scientist Ken Farley of Caltech in Pasadena said that even before the Perseverance rover landed on Mars, scientists had wondered about the origins of the rocks in the area.

“I was beginning to despair we would never find the answer,” he said.

“But then our PIXL instrument got a good look at the abraded patch of a rock from the area nicknamed ‘South Séítah,’ and it all became clear: The crystals within the rock provided the smoking gun.”

Dr Flannery said the PIXL data, analysed at QUT, showed the crystals in the rock were a result of cooling lava which had been altered by water several times.

The core samples collected by the Perseverance rover will be recovered in future Mars missions and be brought back to Earth for in-depth analysis.

“We are all very fortunate to be involved in such an exciting mission,” Dr Flannery said.

Dr Flannery said the Perseverance Rover mission to Mars was a unique opportunity for QUT staff and students to take part in a research project seeking to answer the profound question of whether or not life existed somewhere else in our solar system.

“The Perseverance Rover is the most complex object ever sent to Mars. The mission has several extremely ambitious goals - including searching for past life in Jezero crater, caching samples that will be returned to Earth, and paving the way for human missions,” Dr Flannery said.

In another research project, QUT researchers led by Associate Professor Thierry Peynot recently successfully demonstrated technology that could be used to drive the first Australian-made rover to land on the Moon from 2026.