Brisbane’s rich music scene of the 1970s and 80s is in the spotlight at a State Library of Queensland exhibition marking the culmination of a research project by QUT Creative Industries music lecturer and former Go-Betweens member Dr John Willsteed. 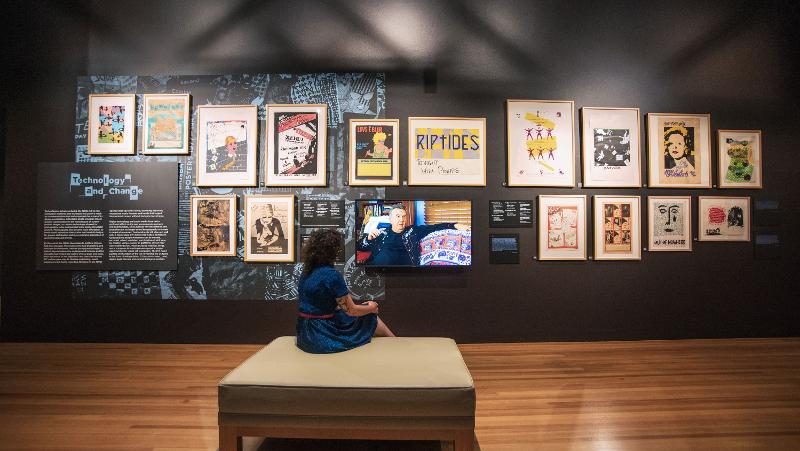 Bands featured in the exhibition’s posters and handbills include: The Saints, The Riptides, The Go-Betweens, The Leftovers, The Upsets, Razar and The Black Assassins. Curated by Robyn Hamilton and Rueben Hillier at State Library, it was inspired by material Dr Willsteed collected during research carried out in 2017 after receiving the Letty Katts Award in 2016.

“The Letty Katts Award from State Library supports the research and documenting of Queensland’s music history,” said Dr Willsteed, who joined his first proper band in 1978, the feminist punk group Zero (subsequently Xiro and Xero), was a member The Go-Betweens in the late 80s and has been playing with Brisbane-based Halfway since 2010.

“I put out a call on social media for posters relating to music - bands, venues, festivals etc. The focus was on Brisbane and it has been a lot of fun, not least because the period is one in which I first began playing music.

“About 350 posters were donated, and with research assistant Alan Boyle, a comprehensive document was developed – bands, venues, dates, designers and so on.

“I have been consulting with the curators as well as supplying extra content for the exhibition (music, interviews, footage, contacts and context). Robyn and Reuben also drew on the existing State Library collections as well as subsequent donations.

“Each item has a story to tell and I love them. They have so much to say about Brisbane in those quite repressive Joh Bjelke-Petersen years.

“I made some of the posters, played some of the shows and was a punter at others so it has brought back many memories and given me an opportunity to help flesh out Brisbane’s sub-cultural history.” Dr Willsteed said the period covered by the exhibition was one in which teenagers keen to see live music sometimes had to dice with danger as authorities placed restrictions on venues and band activities.

“Music was developed underground in cheap rehearsal spaces and the same do-it-yourself attitude applied to band and gig promotion,” said Dr Willsteed who is now working on the development of a Brisbane Music Trail – a spatially anchored AR experience.

“Poster design and production was sometimes quite detailed and artful, and sometimes pretty basic – hand-cut stencils, line drawing, hand-lettering and late-night kitchen table screen-printing sessions. The results show the determination of Brisbane’s young people to pursue creative lives within the conservative social and political landscape of the era.”

“Visitors can immerse themselves in the era’s DIY design and the bands and venues of Brisbane’s independent music scene at a pivotal moment in the city’s history,” she said. “Brisbane’s conservative climate at the time sparked a rebellious youth culture. Bands thrived and music posters became a creative outlet for youth which now give a snapshot of the mood of those years.”

Find out more at slq.qld.gov.au

Poster 3: Ed Wreckage. Rock and Roll: The Leftovers and Razar at the Beehive, 1978. John Oxley Library, State Library of Queensland