The wet-etching process was tested in a lab by being applied to commercially available aluminium alloy 6063 that is commonly used for doorknobs and frames, window panels and hospital and medical equipment.

Professor Spann said they tested respiratory syncytial virus (RSV) that causes infant bronchiolitis and pneumonia and rhinovirus (cause of the common cold) on the wet-etched aluminium surfaces. “The nanotextured aluminium surfaces significantly sped up the inactivation process of these two common pathogens,” she said.

“We then collaborated with Dr Alyssa Pyke, together with the Public Health virology team from Queensland Health Forensic and Scientific Services to test the nano-pillared aluminium against SARS-CoV-2 in their  biological secure containment facility that is specially equipped with technology to prevent the virus from spreading.”

Professor Spann said this study is believed to be the first to characterise how virus particles, including those of COVID-19 are influenced by nanostructured surfaces.

“We tested the COVID-19 virus on the surface eight times at each different time points: after 3 hours, 6 hours 24 hours and 48 hours on the nano-pillar surface.

“Within six hours no viable virus could be recovered from the nanostructured aluminium, although the virus remained alive on smooth aluminium for longer than 24 hours and on plastic for longer than two days.

“At the three-hour mark seven out of the eight tests showed the virus was no longer viable.” 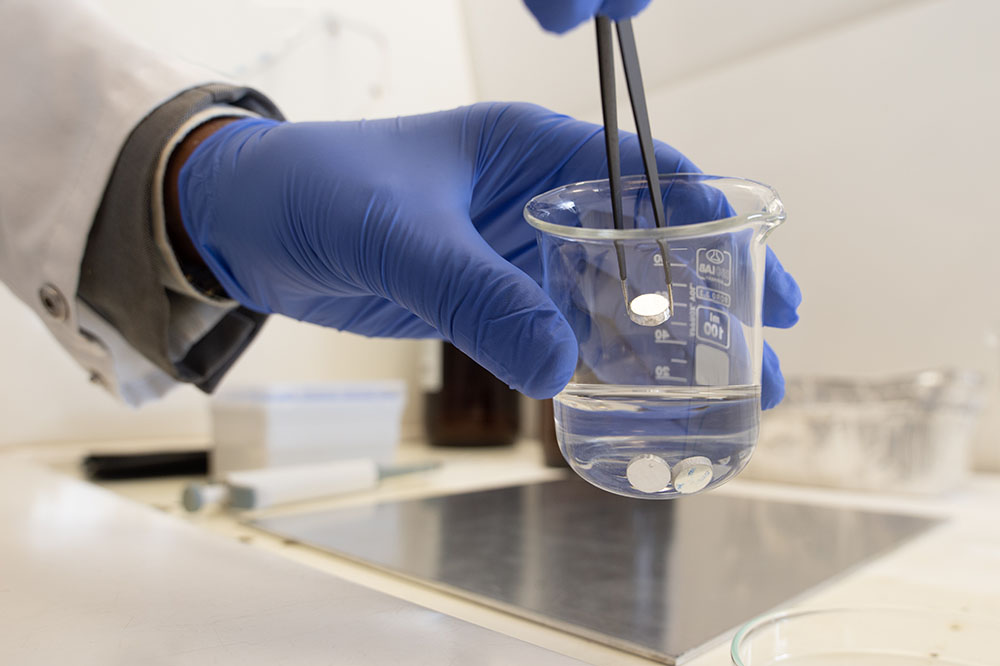 Professor Spann said it was known that ‘flu and respiratory viruses could be transmitted via contaminated surfaces.

“We presume that this is one of the ways that COVID-19 is spreading,” she said.

“The simple wet-etching technique gives surfaces a nanoscale roughness that people cannot feel, but which kills a range of bacteria and viruses,” Professor Yarlagadda said.

“We have tested the nanomechanical properties of the etched surfaces and found the nanopillars can withstand much larger forces than those applied by the hand.

“Since the process involves strong solvents, the etched surfaces have to be installed as end-products rather than treated in-situ.

“As contact transmission can easily occur via hospital medical devices in ICUs, operation theatres or general wards and via general accessible surfaces such as lift buttons, light switches, telephones, handrails, taps, benches, tables, sinks and toilets. All these surfaces could benefit from this technology as an ongoing public health measure.

“However, we are also working on upscaling this technology to develop a film or spray technology.”

Professor Yarlagadda said the team had also developed another antibacterial technology for use with titanium that can be used for commercial applications to both orthopaedic implants and other surgical equipment.