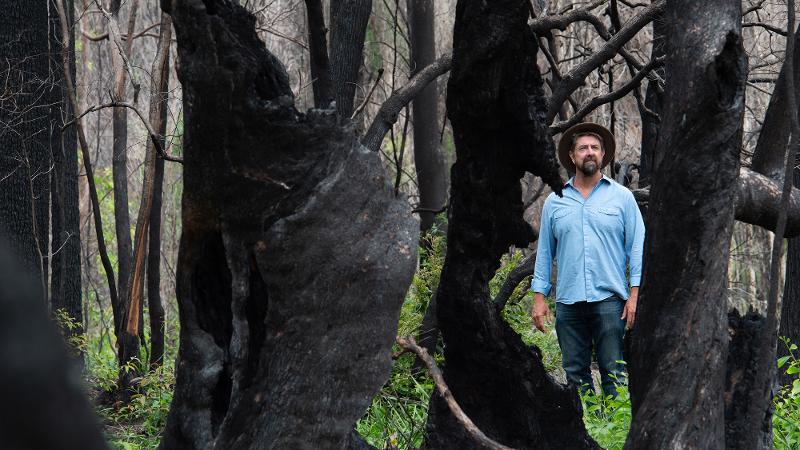 This innovative technology combination will scan the trees at night to identify their signature body heat across unburnt patches and known koala locations across Kangaroo Island.

QUT ecologist Associate Professor Grant Hamilton leads the QUT team which developed the artificial intelligence that underpins the high-tech combination, which includes an algorithm that identifies koala heat signatures in the trees.

“The drones will fly approximately 30 metres above the tree canopy of known koala habitats on Kangaroo Island and use onboard thermal cameras to collect data on koalas,” Professor Hamilton said.

“The data can then be downloaded and analysed to provide an entire population count much more quickly than traditional ground surveys.

“Our research has shown this technology and method is a faster and more accurate way to count koalas and monitor population changes over time.”

“This rapid process of data collection, analysis and providing results enables improved management of wildlife, particular after catastrophic events such as bushfires”

The drone thermal surveys will be carried out by Airborne Data Acquisition and analysed by Professor Hamilton’s team.

Wildlife and Habitat Bushfire Recovery Taskforce Chair Dr Felicity-ann Lewis said, before the bushfires about 50,000 koalas were estimated to live on Kangaroo Island, having grown from a population of 18 that were introduced to the island in the 1920s.

“Earlier this year it was estimated that around 5,000 to 10,000 koalas remain on Kangaroo Island and the new survey will now confirm the population number,” Dr Lewis said.

“About 85 per cent of their habitat was bushfire-affected, including most of the blue gum plantations where many koalas lived.

“Using innovative technology such as drones and infrared cameras we will be able to undertake a new count which will allow us to better understand the remaining population density and distribution.

“This will help National Parks and Wildlife Service South Australia to plan a way forward and ensure the sustainability of one of Australia’s most iconic and much-loved animals on Kangaroo Island.”

A final population count is expected later this month.

QUT journalism students ahead of the curve with online launch

While much of the nation was in COVID-19 lockdown, QUT journalism students were busy preparing content for their new online magazine, produced via a ‘virtual newsroom’.