Robot round-up: the robot-human connections that will change our world 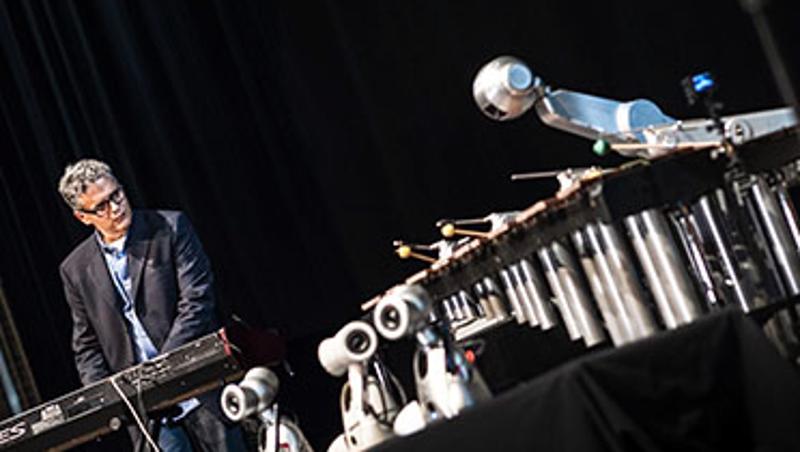 The robotics revolution won't just provide mechanical helpers for humanity - it's creating a new class of collaborators that will help take human culture to new heights.

Media had a sneak peek of the performance at a press conference at QUT today.

"Professor Weinberg's international research hub is at the cutting edge of art and science - its robotic musicianship research and development is literally redefining the way we create, perform, listen to and consume music," Mr Parsons said.

"Shimon Robot & Friends has stunned international audiences and we're really pleased to offer Australians the chance to enjoy a performance unlike anything they've seen before."

The band's talented drummer, Jason Barnes, demonstrated to media his robotic prosthetic arm, which allows him to drum faster than any other human.

Mr Parsons said a major Robotronica theme was exploration of the future nexus between high-tech robotics and the human body, and robotic augmentation of human capabilities.

Robotronica is presenting a rare, real-world chance to meet people who have actually become 'cyborgs' - all human but part robot - as well as the sophisticated, autonomous robots that interact with humans in fields from health and industry to the arts and environment.

Robotronica features mind-boggling examples of the marriage of cutting edge robotic technology with human endeavour:
•The man who hears colour: Neil Harbisson, the world's first certified cyborg has a cybernetic sensor system, looking like an antenna, permanently implanted in his head. Mr Harbisson is an artist who can see only in grey scale but his cybernetic antenna allows him to perceive colour as sound - the busier the colour pattern, the more notes he hears in his head.

•The cool and groovy robot Shimon Robot & Friends: Shimon, all the way from Georgia Tech in the US, is a big-eyed robot that plays improvised percussion on the marimba alongside its fellow human musos. Shimon not only plays in perfect harmony with the humans, it also 'grooves' in time to the music just like a flesh and blood jazz aficionado. The band recently premiered at the Lincoln Centre in Washington DC.

•The three-sticked drummer: Jason Barnes plays with Shimon Robot & Friends. He is fitted with a robotic arm that can hold two drumsticks. He is not only the fastest drummer in the world but the most able to play complex percussion: one robotic stick is controlled by Mr Barnes' arm electronically through electromyography (EMG) muscle sensors and the other stick "listens" to the music being played and improvises.

•The Robotronica finale extravaganza - DeepBlue and the Perff Bots, featuring the local human orchestra DeepBlue for the first time sharing the stage with over 40 robots. The performance is the result of a collaboration between staff and students across QUT's Science and Engineering Faculty and Creative Industries Faculty. The performance explores the relationships between humans and their machines and features Australia's first trapeze robot, the Acrobot joining a human circus trapeze artist to strut and swing their stuff.

Robotronica visitors will see and hear all of this and more in an unmissable grand finale when 40 colourful robots dance, turn, clap, light up and generally amaze from 6pm.

For the kids there are plenty of free robotic games and activities to fascinate and inspire them into the world of science, maths and technology. They will be able to try their hand at:
•The cute, pint-sized Nao robots which will perform every hour on the hour on the stage
•Pinokio - a curious, friendly robotic desk lamp out to get your attention
•Trunc - a shy robotic ball loaded with personality
•Games galore - Robot sumo wars, a mini quadcopter obstacle course and the aquabot environmental challenge.
•Robot Story Time - Radius the humanoid robot uses voice and gestures to tell various stories.
•Aquabot Environmental Challenge - All ages can try their hand at piloting a remotely operated underwater robot.

For everyone:
•Go figure this mix of humour and poignancy in Australia's first 'kerbside collection' robot. It's a roboticised installation from a deceased estate, called the Hard Rubbish All-Terrain Vehicle, which will meander through the crowd from 1pm to 6pm.
•Keynote talks from leading roboticists will be held throughout the day. Many of these talks, as well as the Shimon Robot & Friends concert will be live streamed to the outdoor main stage screens.

Robotronica is QUT's free, one-day event on Sunday, 23 August at QUT's Gardens Point campus in George St, the city. It runs from 10am to 7pm. Visit the Robotronica website for details.