Beat the future at Robotronica 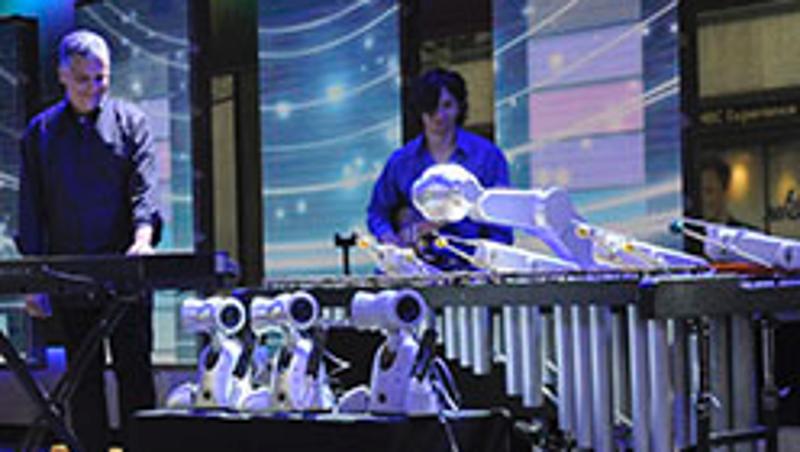 Imagine a future in which music is improvised and performed by humans and robots together, sharing the stage, combining the best of their skills. That future is already here and world-leading band Shimon Robot & Friends will perform in Australia for the first time at QUT's Robotronica on 23 August.

The band includes percussionist and arm amputee Jason Barnes who with his robotic prosthesis is literally the fastest drummer in the world.

Robotronica creative director Jonathan Parsons said the Shimon Robot plays the percussion instrument, the marimba, and is the brainchild of Professor Gil Weinberg and his team at Georgia Tech in the US.

"The band has stunned audiences playing in concerts and festivals from Washington DC to Munich, and now Brisbane residents have the opportunity to enjoy a musical performance that will truly be beyond the realm of anything they have ever experienced before," Mr Parsons said.

"Professor Weinberg is the founding director of Georgia Tech's Centre for Music Technology in Atlanta USA, an international centre for creative and technological research in music that is redefining the way we create, perform, listen to and consume music.

"He will give a free one-hour talk on Friday 21 August at QUT in which he will explain how composition and robotic musicianship work, while Shimon Robot & Friends and their human band members will perform at Robotronica on 23 August.

The robotic drumming prosthesis has two drumsticks that are powered by motors. While the first stick is controlled both physically by the musicians' arms and electronically using electromyography (EMG) muscle sensors the other stick "listens" to the music being played and improvises.

"Both events are free but bookings are essential," Mr Parsons said.

Professor Arthurs said maths and creativity in society were at the heart of what continued to push the boundaries in appreciation of music and that historically this had always been the case.

"From around 500 BC when Pythagoras philosophised the heavenly spheres were comprised of musical scale and number - the Music of the Spheres - to the introduction of the waltz's ¾ beat in Europe in the 1500s - 1800s to the mid-20th century when the Beatles, pop music and the 4/4 time swept the world, maths has always been an important component in fundamental change and advancement in composition, and it has also correlated with great societal and cultural change," Professor Arthurs said.

"Now in a robotic age where we can envisage a time when we will work and live alongside robots, it is natural that music will again be at the forefront of change, using new technologies of the age along with the ability to perform complex intelligent mathematical tasks, to push the boundaries of musical improvisation, composition, performance and consumption."

"This isn't about just preprogramming or a robot copying its human band members. As Professor Weinberg points out these robotic musicians truly create and interact with their human band members to deliver new and exciting music that would otherwise not be created.

"Together they take jamming, improvisation and musicianship to a whole new level."