Robotronica: come and meet the future 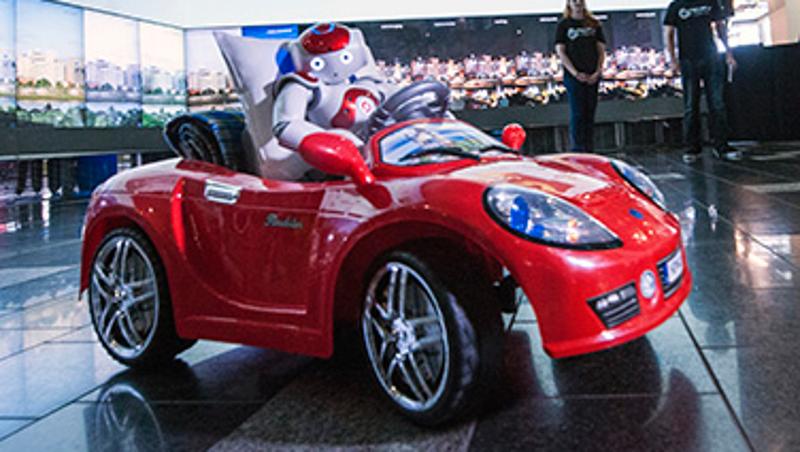 QUT has pulled together an all-star cast of world firsts in robotics for its popular Robotronica spectactular on August 23.

From the future of the human body and our environment to the future of toys and entertainment, you won't just see an explosion of robotic and technological innovations - you will touch, play, build, race, drive, perform with and be moved by them.

"We are honoured to have Neil join us at Robotronica - he's a real inspiration," Mr Parsons said.

"Born in Britain and raised in Spain, Neil has a form of extreme colour blindness; he can see only in greys.

"In 2004 he collaborated with Adam Montandon to create a cybernetic system permanently implanted in his head which allows him to perceive colours as sounds - the busier the colour pattern, the more notes that play in his head.

"He says he enjoys supermarkets more than ocean landscapes because they sound more interesting.

"Neil will discuss this technology in a public talk at Robotronica. He'll also speak about co-founding the Cyborg Foundation, established to defend cyborg rights, help others to access cyborg technology and promote cyborgism as an art movement."

Mr Parsons said Robotronica would showcase the future of live entertainment - robots at the cutting edge of art and science. The line-up includes:
•Shimon - the first public performance in Australia of Georgia Tech's jazz-improvising robot
•Radius - a robot storyteller built to educate and engage children
•a finale spectacular by QUT-sponsored DeepBlue and a cast of 50 custom-made QUT bots.

QUT roboticist and chief bot-builder for the Robotronica finale Professor Jonathan Roberts said the university was a world leader in developing the next generation of robots equipped with advanced robotic vision.

"Having robots that can see and perceive the world as humans do is the key to them working safely alongside us in dynamic environments in which obstacles are constantly moving - chairs, ladders and people, for instance," said Professor Roberts, from QUT's Science and Engineering Faculty and the Australian Centre for Robotic Vision.

"Choreographed live entertainment represents a particularly chaotic environment for robots to work in. Robotronica's pioneering human-robot finale is the first stage in our quest for vision-enabled, autonomous robotic performers and will direct our future research in this field."

Mr Parsons said the public will have plenty of opportunities to test drive many of Robotronica's robots including miniature quadcopters, underwater robots and Spheros.

"The program is also packed with a range of hands-on workshops from making wearable technology to Lego robots," Mr Parsons said.

"The workshops were extremely popular at our last Robotronica event so make sure you book early for this year's workshops through the Robotronica website - the program and workshop bookings are available now.

"There will also be a series of talks about the impact of robotics on you and your community including in healthcare, agriculture, environmental sustainability, entertainment and education."

QUT's 50-metre pool will be brimming with a flotilla of autonomous boats and submersible robots, demonstrating the university's cutting-edge research in remote sensing.

They're part of QUT's trifecta of land, air and water-based robots designed to protect our environment and agriculture.

Among the robotic boat demonstrations will be Dr Matthew Dunbabin's Inference boats, which he developed to monitor the effects of major weather events such as cyclones on our waterways and provide early warning on potential environmental disasters.

Equipped with cameras and various air and water sensors, Inference marks the first time in the world that researchers can collect real-time data about these environmental impacts across waterways, helping authorities better plan for similar events in the future.

"As you can imagine, it's far too dangerous for a human to be out in a boat during a cyclone, collecting water samples to measure the amount of topsoil washing into a lake, for instance," said Dr Dunbabin from QUT's Institute for Future Environments and Science and Engineering Faculty.

"Inference is a game changer in terms of environmental research because it's designed to be there on the water 24/7, a permanent sensing presence capturing the hard data - that includes monitoring water quality; measuring gas emissions; inspecting jetties and dam walls; and mapping banks and lake-beds."

Mr Parsons said QUT's troupe of Naos will be back by popular demand, and with new tricks up their mechanical sleeves.

"If Robotronica visitors find themselves a bit overawed by the future, the Naos will help people chill out with sessions of the ancient art of Tai Chi," he said.

"We're also running a competition to name a Nao, with the winner announced on the day - check our website for how to enter.

"The crowds will also love interacting with Pinokio, a curious robotic desk lamp that wants to capture your attention.

"The Super Box Friends are sure to delight youngsters. They're part of a robot petting zoo where children can build and play with box-based bots."

RELATED STORIES
Eco robots - smart solutions to protect our environment
Do you see what I see? Meet the team giving robots an insight into being human.
World-first open online robotics courses for the masses
Robot invasion at QUT