Australian fossil forces rethink on our ancestors’ emergence onto land 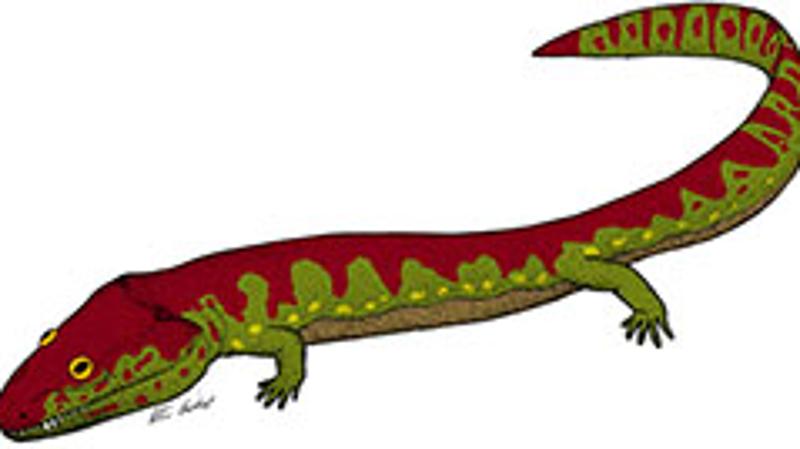 Analysis of a fractured and partially healed radius (front-leg bone) from Ossinodus pueri, a large, primitive, four-legged (tetrapod), salamander-like animal, found in Queensland, pushes back the date for the origin of demonstrably terrestrial vertebrates by two million years, said Dr Phillips, a researcher in the Vertebrate Evolution Group in QUT's School of Earth, Environmental and Biological Sciences.

"Previously described partial skeletons of Ossinodus suggest this species could grow to more than 2m long and perhaps to around 50kg," Dr Phillips said.

"Its age raises the possibility that the first animals to emerge from the water to live on land were large tetrapods in Gondwana in the southern hemisphere, rather than smaller species in Europe.

"The evolution of land-dwelling tetrapods from fish is a pivotal phase in the history of vertebrates because it called for huge physical changes, such as weight bearing skeletons and dependence on air-breathing."

Dr Phillips said the nature of the break in the radius bone was studied using high-resolution finite element analysis by Peter Bishop for his honours research at QUT.

"The nature of the fracture suggests the bone broke under high-force impact.

"The break was most plausibly caused by a fall on land because such force would be difficult to achieve with the cushioning effect of water.

"Indeed, the fracture is somewhat reminiscent of people falling on an outstretched arm and the humerus crashing into and fracturing the radius."

Dr Phillips said the researchers also found two other features that confirmed the tetrapod had spent substantial time on land.

"Firstly, the internal bone structure was consistent with re-modelling during life in accordance with forces generated by walking on land," he said.

"The three findings taken together suggest that Ossinodus spent a significant part of its life on land. This is augmented by its exceptional degree of ossification, which is also consistent with weight bearing away from the buoyancy of water.

"This specimen of Ossinodus is our oldest vertebrate relative shown biomechanically to have spent significant time on land. It is two million years older than the previous undoubtedly terrestrial specimens found in Scotland, which were less than 40cm long."

Dr Phillips said the findings highlighted the value of combining studies on palaeontology, biomechanics and pathology to understand how extinct organisms lived.