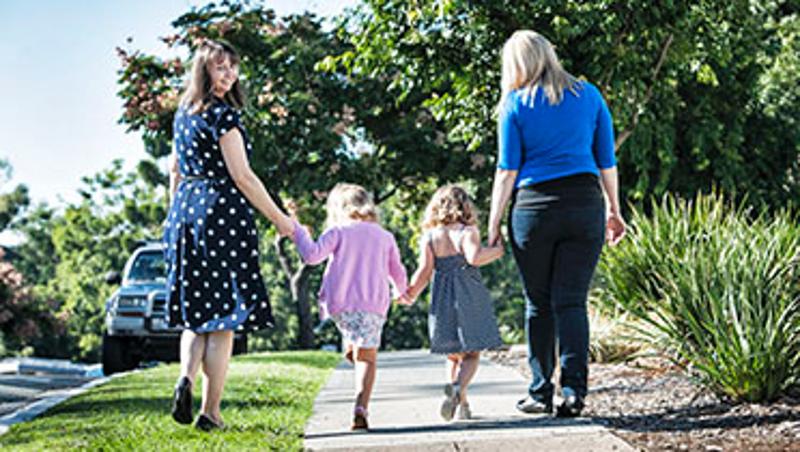 Parents are being urged to take their child's hand when walking as part of a new road safety campaign launched today (Friday May 8), aimed at reducing child pedestrian injuries and deaths when crossing roads or in carparks.

The Take My Hand campaign led by QUT's Centre for Accident Research & Road Safety - Queensland (CARRS-Q), with support from the State Government, Queensland Police Service and RACQ, coincides with the United Nations Global Road Safety Week which is focusing on saving kids' lives.

CARRS-Q Senior Research Fellow Dr Ioni Lewis said in Australia each year it was estimated that around 27 children were killed as pedestrians, and about 650 injured and required hospitalisation.

"For every child pedestrian killed on our roads, approximately 24 are seriously injured, and therefore it is vital to raise awareness of the dangers for kids around cars," she said.

"It's important to remember roads, carparks and footpaths are not playgrounds," Dr Lewis said.

"No matter where you are, it is essential to take a child's hand because developmentally kids under 10 don't have the ability to judge speed and distance of approaching vehicles.

"Research shows that even safe road crossings are a relatively complex activity. They require a number of simultaneous perception and cognition tasks, and we know that at a younger age, the risk of a child being involved in a pedestrian crash is greater due to their undeveloped mental ability and lack of awareness."

As part of the Take My Hand campaign, parents and guardians of children aged 3 to 9 years are being asked to complete an online survey and share their story about how they keep their children safe.

"In Australia, about 45 per cent of children injured in pedestrian crashes were unaccompanied at the time, with a similar number accompanied only by another child.

"What this shows is that in around 90 per cent of cases, there was no adult supervision.

"We are asking parents of at least one child under 10 to contribute to this new research and share their perceptions, experiences and beliefs around child pedestrian safety."

Dr Lewis said the responses would be used to guide the development of a new advertising campaign to improve child pedestrian safety by teaching parents and educators how best to keep their kids out of harms way.

"Ultimately, this new campaign has the potential to contribute to reductions in child pedestrian deaths and injuries," she said.

Parents who participate in the survey can go into a random draw for one of six $50 Coles Myer vouchers.

The Take My Hand survey is available at http://www.carrsq.qut.edu.au/takemyhand

The 3rd UN Global Road Safety Week is an initiative of the UN Decade of Action for Road Safety, and a number of events and activities have been held this week to acknowledge the campaign. These include Kidsafe Queensland's "6 Days of Safety" and the SARAH group's Yellow Ribbon campaign.