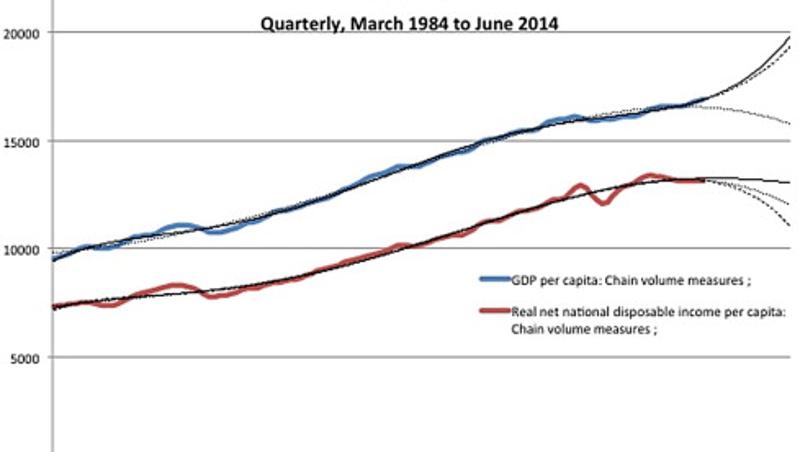 Australian average incomes are falling with the country's population growth "masking underlying economic weakness", according to a QUT economist.

Dr Mark McGovern, a senior lecturer in QUT's Business School, said while it was regularly proclaimed Australia had experienced positive economic growth for more than 20 years, there had been periodic per capita declines, indicating the economy was not as healthy as assumed.

"Looking at national income figures in recent years shows our economy is under stress," Dr McGovern, whose research was recently published in the Economic Analysis and Policy journal, said.

"For example, according to Australian Bureau of Statistics figures, Gross Domestic Product (GDP) per capita peaked in the June 2008 quarter, fell for three periods then took six further quarters to revisit the 2008 high in the September 2010 quarter.

"But if you look at Real net National Disposable Incomes per capita, which is how much money people are receiving, the 2011 December quarter income peak was at $13,406 with $13,156 estimated for June 2014. This is a per capita income drop of $250, or two per cent over ten quarters.

"The overall GDP has continued to increase slightly, but that is the result of population growth, which is masking underlying economic weakness."

Dr McGovern said GDP was growing while national incomes were falling because investment earnings were flowing out of the country to overseas investors.

"Australian GDP does not fully accrue to Australians due to this net outflow of money," he said.

"If these funds continue to leave the country, we could suffer the same financial fate as Ireland and others, where incomes fell despite GDP increasing.

"The Celtic Tiger prided itself on attracting foreign investors who inflated asset values, paid little tax and then left insolvent banks and depressed incomes across the nation."

More immediately, Dr McGovern said the drop in disposable income per capita helped explain why the Federal Government's budget had been badly received by many in the population.

"People rejected the budget and the calls for belt-tightening and there is a general financial ill-ease evident within Australians," he said.

"While the Federal Government is preoccupied with servicing the modest government debt, households are receiving falling incomes to service their own greater debts. All are struggling to make ends meet, and the income drain to overseas only makes things more difficult.

"All will be much worse off if this depressive synchronisation is allowed to continue. Actions need to be taken to rebalance household and government balance sheets, as well as those of some businesses. Interest rates are increasingly unserviceable so they must be further reduced.

"Recognition of problems allows them to be addressed sensibly so we need to refresh public and commercial policies so that the preoccupations of some do not undermine the interests of all.

"There are good ways forward and we need to understand and adopt them."