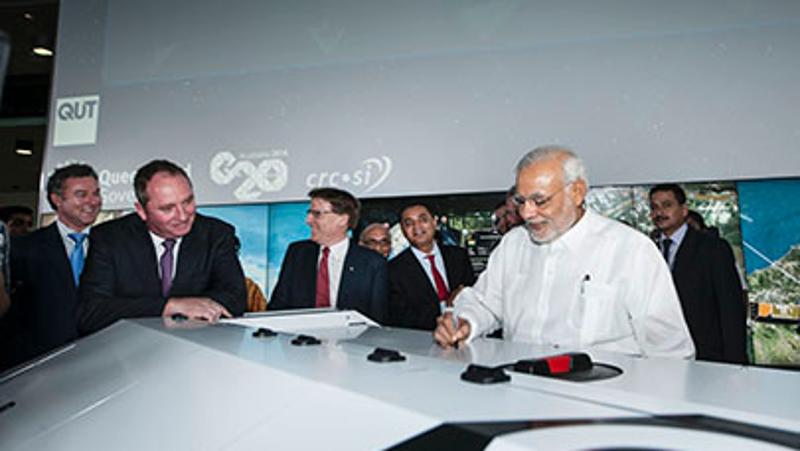 As Australia's leading research centre in robotic vision, QUT has unveiled its latest agricultural robot AgBot II to Prime Minister of the Republic of India Mr Narendra Modi, in Brisbane for the G20 Leaders' Summit.

QUT head of robotics, Professor Peter Corke met with Mr Modi at QUT's Science and Engineering Centre and briefed him on the project's progress.

Asked to write a message on the robot, Mr Modi wrote (translated from Gujarati):

"Research is the mother of invention. The development journey of mankind is a continuous stream of research. Science and technology is very important for agriculture.

"Agricultural scientists rely heavily on science and technology. Agricultural progress is very important for the welfare of humanity. I congratulate you for your efforts here and wish you the best."

QUT roboticists have fast-tracked the design of the new Agbot II, that will potentially change farming practices around the globe, thanks to Queensland Government funding.

Professor Perez said robots would be crucial to the future long-term productivity, profitability, and sustainability of farms.

"We are witnessing how robotics and autonomous systems can lead to transformational practices in areas such as manufacturing and mining, and we see that such technology will also soon transform agriculture," he said.

"Farmers will find that using multiple lighter robots will provide them with significant advantages over the machinery currently in place.

"We have done an economical analysis for weed management that anticipates a reduction of costs of up to 40 per cent in terms of savings in energy, labour and chemicals.

"In addition, the use of robots will enable farmers to increase the adoption of managing specific areas of their paddock differently, for example, some areas might need less fertilizer than others.

"This can lead to further benefits in terms of increasing yield, and reducing volatility in both yield and yield quality.

"Multiple robots operating at low speeds can not only detect weeds, which is the capability of current technology, but also classify them using sophisticated computer vision algorithms. This can open new possibilities for a more dedicated treatment be it chemical or alternatives such as mechanical or electrical-like microwaves."

Professor Perez is part of the QUT headquartered international ARC Centre for Excellence for Robotic Vision.

Professor Perez said the world population was projected to jump from its current seven billion to almost nine billion by 2050 and sustainability and food security would be challenges worldwide.

"It will be critical for Australia and other nations to ensure their food production is competitive and sustainable and robots will play a big role in achieving this," he said.

"We believe robots are a key piece of the puzzle. Robots may not only act on the crop and weeds, but also collect large amounts of data. Therefore, if the appropriate digital infrastructure is developed, analysis of big data analytics in conjunction with novel decision systems could further reduce input cost and increase crop yield and robustness. We are currently working at QUT on an inter-disciplinary effort to create new lines of research to enable this.

"Like the internet and mobile phone technologies a decade ago, it is hard to envisage the full potential that robotic technology will bring. We can but imagine their full economic, environmental and social impacts," Professor Perez said.