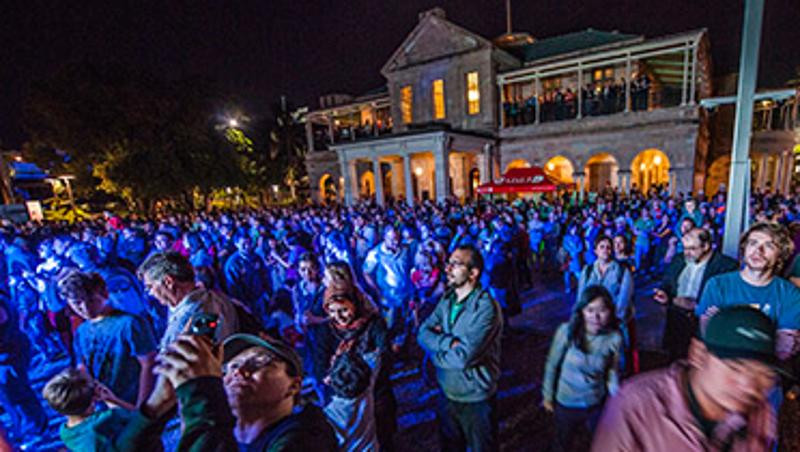 The electronic extravaganza included the largest swarm of flying robots ever seen in the Southern Hemisphere at that time.

The 30-quadcopter electronic art and design spectacular was the highlight of Robotronica, a free event designed to encourage people to learn about and interact with our mechanical mates.

"Professor Ishiguro views his research into human-like robotics as a way to more fully understand what it is to be human," he said.

But it was QUT's own Nao robots that stole the hearts of the public with their energetic dance performance as part of the Robotronica finale.

They were accompanied by indie bitpop band 7bit Hero, an innovative Brisbane-based trio who combine gigging with electronic gaming.

QUT's head of robotics, Professor Gordon Wyeth said the 2013 event was a unique concept that brought international, national and local robotic experts to QUT to show people the role that robots were playing in their lives now and would play in the future.

"We displayed the flying robots developed at QUT's Australian Research Centre for Aerospace Automation that can safely provide live aerial pictures of rapidly changing natural disasters such as bushfires and floods," he said.

"Our prototype agricultural robot - AgBot - is a transformational technology for agriculture that moves away from ever larger and more expensive machines, to lightweight low cost machines that are better for productivity and the environment.

"AgBot is designed to safely navigate along crop rows while intelligently spraying weeds and avoiding damage to the crop."

QUT has become a global focal point for international robotics research, with this year's establishment of an Australian Research Council (ARC) Centre of Excellence in Robotic Vision.

Headquartered at QUT, the centre is one of the largest groups of robotics vision researchers in the world, involving experts from three other Australian universities and international partnerships with universities such as Oxford and Georgia Tech.

Centre researcher Dr Feras Dayoub said QUT was now searching for talented PhD students to take part in what is some of the most exciting research in the field of robotics and computer vision.

"We want people who are looking to the future, open-minded about the roles robots could play in human life and passionate about this research," he said.

"The centre will develop new sensing technologies that allow robots to navigate among people, manipulate objects and interact with humans inside a changing environment such as a hospital, farm and other workplace and inside our homes."