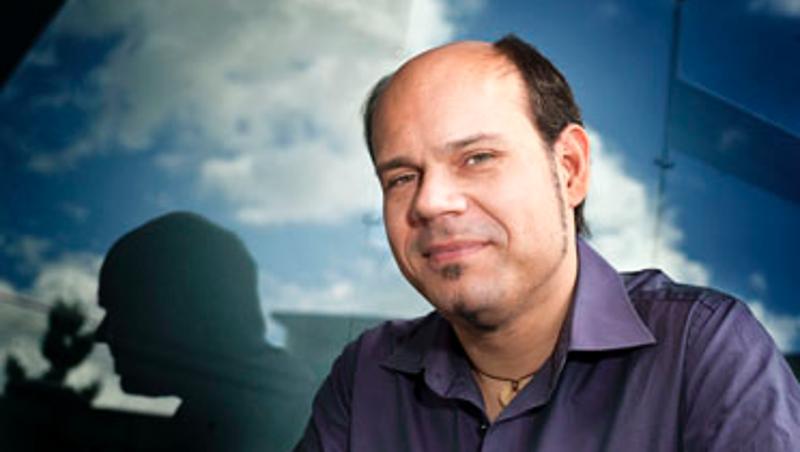 "If each of these Australian accounts represented one user, this would translate to a national Twitter adoption rate of 12 per cent," said SMRG leader Professor Axel Bruns, who is a researcher at QUT's Creative Industries Faculty.

Professor Bruns said the study provides the first detailed insight into how Australians use Twitter.

Research tools developed by SMRG captured the publicly available profile information for all Twitter accounts in existence by September 2013, then identified Australian users according to a number of criteria.

The study showed that Twitter adoption in Australia grew slowly in the early days of the service, before peaking at more than 100,000 new registrations per month in early 2009. 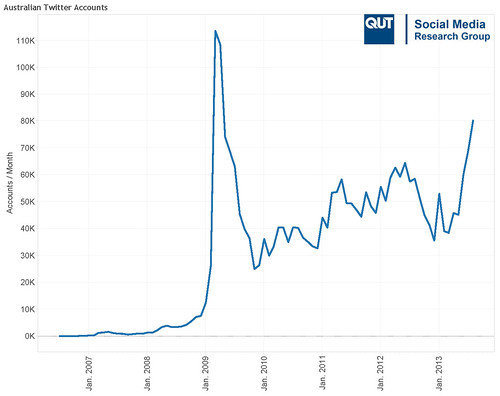 "This is a typical pattern", said Professor Bruns.

"The early hype that saw substantial numbers of early adopters flock to the service may be gone, but as an established social medium Twitter now enjoys a relatively steady influx of new Australian accounts.

"What we cannot see from our data, however, is the number of existing accounts that were deleted each month."

The study gives SMRG researchers a benchmark for further methodological development and analysis in their two-year project funded by a $710,000 Linkage, Infrastructure, Equipment and Facilities (LIEF) grant from the Australian Research Council.

QUT is collaborating with Deakin, Curtin and Swinburne universities and the National Library of Australia to develop state-of-the-art tools for large-scale research into Australian uses of social media.

"Our comprehensive survey of the Australian Twittersphere is invaluable as a basis for the study of how Australians engage with social media on a daily basis", said LIEF Project Manager Dr Darryl Woodford.

Queensland and the Northern Territory are among the leading adopters, while Western and South Australia lag slightly.

ACT residents appear to be especially enthusiastic Twitter adopters. The researchers said this could be related to the particular socioeconomic factors as well as the concentration of national media, political and administrative personnel in Canberra, many of whom would have their own Twitter accounts. 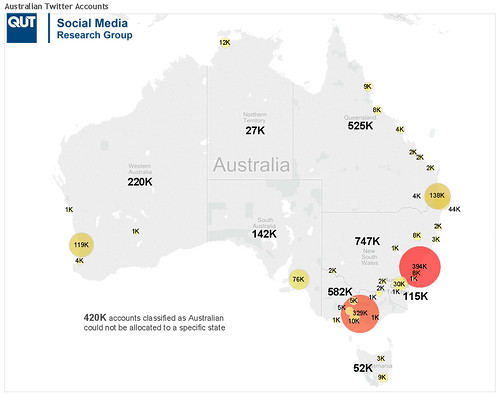 "If this concentration is confirmed by further analysis, it would point strongly to the growing importance of Twitter in the public debate of political and social matters", said Professor Bruns.

The full report is available on the SMRG website.

Early findings from SMRG's study of the Australian Twittersphere have been also published on its website as well as at The Conversation. Additional analysis and comparisons with patterns in the global Twittersphere will follow in the coming months.

RELATED STORIES
Your online opinions are changing society: QUT will show you how
Social media a 'double-edged sword' for politicians
First map of Australia's Twittersphere