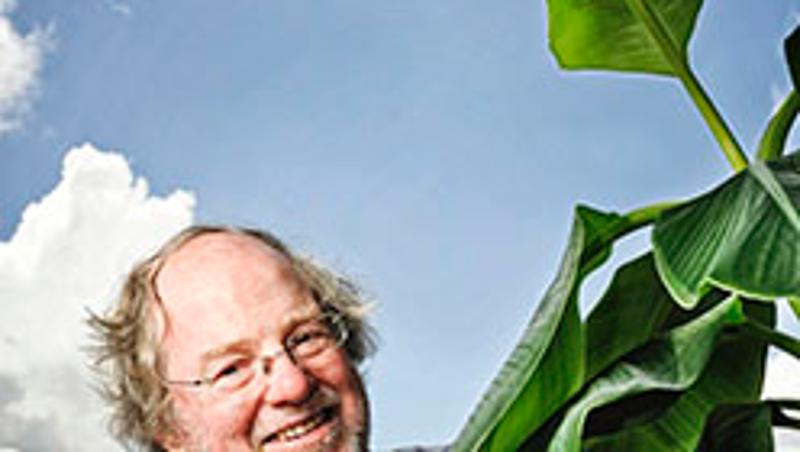 The world's first human trial of pro-vitamin A-enriched banana, expected to lift the health and well-being of millions of Ugandans and other East Africans will start very soon.

The QUT project, led by Distinguished Professor James Dale and backed with close to $10 million from the Bill and Melinda Gates Foundation, is one of the most significant biofortification projects in the world today.

"Human trial is a significant milestone for this project which started in 2005 and should see pro-vitamin A-enriched banana varieties being grown by Ugandan farmers around 2020," Professor James Dale said.

"The Highland or East African cooking banana, which is chopped and steamed, is a staple food of many East African nations but it has low levels of micronutrients particularly pro-vitamin A and iron.

"There is very good evidence that vitamin A deficiency leads to an impaired immune system and can even have an impact on brain development.

"Good science can make a massive difference here by enriching staple crops such as Ugandan bananas with pro-vitamin A and providing poor and subsistence-farming populations with nutritionally rewarding food."

The bananas have been harvested from the QUT field trial in Innisfail, north Queensland and transported to the United States for the world-first human trial. The human trial will last for six weeks with conclusive results known by the end of the year.

Professor Dale said previous US trials using Mongolian gerbils had proven successful.
He said while on the outside the banana plants looked just like any other banana the inside was a whole other story.

"We are aiming to increase the level of pro-vitamin A to a minimum level of 20 micrograms per gram dry weight in order to significantly improve the health status of African banana consumers."

"We know our science will work," Professor Dale said.

"We made all the constructs, the genes that went into bananas, and put them into bananas here at QUT.

"Hundreds of different permutations went into field trials up north and we tested everything to make sure our science worked here in Queensland.

"Now the really high-performing genes have been taken to Uganda and have been put into field trials there."

He said over the next three years an elite line of banana plants would be selected and used in multi-location field trials in Uganda.

He said once approved in Uganda, there would be no reason why the same technology couldn't be used to enrich crops in surrounding East African countries including Rwanda, parts of the Democratic Republic of Congo, Kenya and Tanzania.

"In West Africa farmers grow plantain bananas and the same technology could easily be transferred to that variety as well," Professor Dale said.

"This project has the potential to have a huge positive impact on staple food products across much of Africa and in so doing lift the health and wellbeing of countless millions of people over generations."

Professor Dale said the biggest challenge facing the project was purely one of logistics, going from a small-scale project to one on a national scale but the university was working in partnerships with a team of scientists in Uganda who would, over the coming years, be joined by five Ugandan PhD students currently working in Professor Dale's team.