QUT’s swim belt could prove gold in the pool 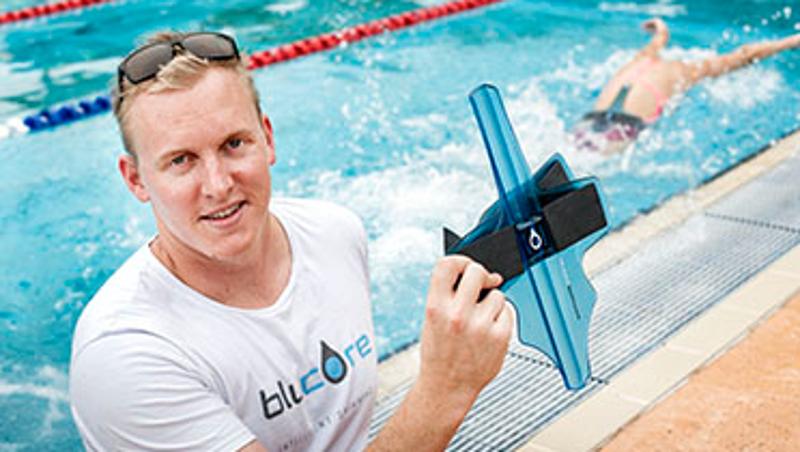 It's the simple device that could help the Australian Swim Team reach for more gold - and it was developed right here in Brisbane.

The Corsuit straps on like a belt, keeping a swimmer's spine straight and body streamlined.

With their lungs lower and their hips higher in the water, the swimmer gains a mechanical advantage because their muscles are positioned to generate maximum power and minimum drag.

Developed and prototyped in 2010 by Sam James while studying industrial design at QUT, he's now commercialised the performance-enhancer with the help of the university's innovation arm, bluebox.

"2010 was a tough year for swimming because it was the year that full bodysuits were banned from competition, which immediately slowed swimmers down," said Mr James, himself a former national-level swimmer.

"I wanted to design something that would support and strengthen a swimmer's core muscles and posture, instead of artificially bracing them like the bodysuits' in-built corsets did.

"The Corsuit is designed to be worn for short periods in training so swimmers can build their strength and experience what position their body should be in - you can really feel the difference in your posture when you use it.

"But it's most valuable when worn during a pre-race warm-up, where that timely feedback on body position can help shave a little extra off your time."

Mr James spent three years researching and refining the Corsuit, including countless hours of underwater filming to make sure it helped create perfect posture and the most efficient stroke.

A handful of international-level coaches and swimmers have trialled the product, including Olympic champion coach Stephan Widmer and World Champion and Olympic medallist Christian Sprenger.

"I really liked how the Corsuit streamlined my body in the water," Mr Sprenger said.

"It helped me flatten my angle of attack in breaststroke, which helped me maintain momentum - there's nothing like it out there."

Swim squads across Brisbane are already using the lightweight, low-profile product in their training regimes. Some of those took the Corsuit to the Australian Swimming Championships, which finished on Sunday April 6.

The Corsuit is designed for all swimmers from age 12 up. Mr James, now a post-graduate student in engineering, is considering developing a children's version of the Corsuit.