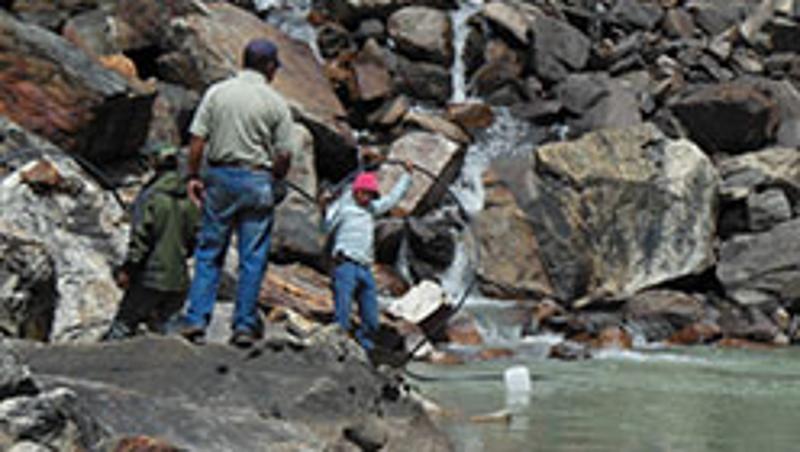 With world temperatures rising, the prospect of inland tsunamis in countries containing glacial lakes, such as Bhutan, is increasing but QUT researchers believe they have come up with a solution that would also help provide power to villages.

Physicist Doctor Stephen Hughes from QUT's School of Chemistry, Physics and Mechanical Engineering and Institute for Future Environments said glacial lakes sit at the ends of glaciers and global warming is increasing their area and depth.

"The trouble is," he said, "that glacial lakes have natural dam walls made from stones and rubble carved from mountains by glacial ice and as the water level in glacial lakes increase, so too does the pressure at the base of their dam walls.

"This increases the risk of a wall bursting and when this happens it can result in the catastrophic flooding of downstream communities."

He said this type of flood was known as a Glacial Lake Outburst Flood (GLOF) or silent or inland tsunami and Bhutan had had two tsunamis over the past few decades.

"In 1994 a tsunami in the Punakha Valley killed 21 people and caused massive destruction while an earlier tsunami involving the Jichu Drake glacial lake in 1968 destroyed much of the city of Paro killing an unknown number of people.

Doctor Hughes and QUT civil engineer Associate Professor Les Dawes have just returned from Bhutan where they conducted experiments which demonstrate that siphoning water from glacial lakes could be the key to preventing these inland floods and tsunamis.

Professor Dawes said the physically challenging experiment involved a 35 kilometre hike from their base camp at 3,000 metres to a lake situated at 4,200 metres, just below Jichu Drake, a 6,794 m mountain in Bhutan.

"Working at this altitude meant our oxygen level was down to 60 per cent of what it would be at sea level, but we were able to conduct our experiment and demonstrate that siphons constructed from one inch diameter polypipe could be used to drain glacial waters to reduce the risk of floods," he said.

"This is an important finding as glaciers in Bhutan and elsewhere in the Himalayas and the world are continuing to shrink as the average temperature of the air and oceans rise."

"Ultimately, it would be good to get to the point where local farmers, such as the yak farmer who accompanied us on our expedition, had access to enough polypipe to set up siphons at the start of summer.

"Once the ice in the lakes began to thaw at the end of winter, they could keep an eye on water levels and employ siphons as necessary.

"This would be an extremely cheap and effective way of preventing potential disasters."

"It would be very simple to run a pump at the other end of the siphon and create a micro-hydroelectric facility," he said.

"Most villages in the mountains have no electricity at present except for a few small solar panels in some cases. However, in general the mountains of Bhutan are not a good place for solar power since sunrise is late and sunset early because of the mountains and there is a lot of cloud cover."

"Hydroelectricity could provide power for hot water and other necessities, at least over the summer months when the siphons were operating."

The experiment was also conducted with Som Gurung, Dean of Academic Affairs at Paro College of Education, Royal University of Bhutan who is also a QUT PhD student being supervised by Dr Hughes and Professor Dawes.

The expedition was jointly funded by the School of Chemistry, Physics and Mechanical Engineering, within the Science and Engineering Faculty, and the Institute for Future Environments.