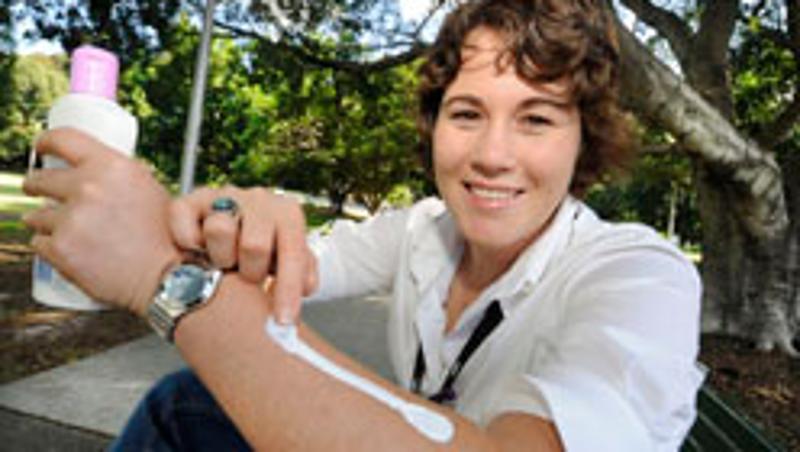 Next time your kids complain about putting on sunscreen, tell them this: Sunscreen shields a superhero gene that protects them from getting cancer.

It is widely accepted that sunscreen stops you from getting burnt but to date there has been academic debate about the effectiveness of sunscreen in preventing skin cancers.

Now QUT has undertaken a world-first human study to assess the impact of sunscreen at the molecular level.

Lead researcher Dr Elke Hacker, from QUT's AusSun Research Lab, said sunscreen not only provided 100 per cent protection against the damage that can lead to skin cancer but it shielded the important p53 gene, a gene that works to prevent cancer.

"As soon as our skin becomes sun damaged, the p53 gene goes to work repairing that damage and thereby preventing skin cancer occurring.

"But over time if skin is burnt regularly the p53 gene mutates and can no longer do the job it was intended for - it no longer repairs sun damaged skin and without this protection skin cancers are far more likely to occur."

The study, published in the Pigment Cell & Melanoma Research journal, looked at the impact of sunlight on human skin, both with and without sunscreen, and found no evidence of UV-induced skin damage when proper application of sunscreen (SPF30+) had been applied to exposed area.

"Melanoma is the most lethal form of skin cancer with research showing damage of melanocytes - the pigment-producing cells of the skin - after sun exposure plays a role in the development of skin cancer," Dr Hacker said.

Dr Hacker said the study, funded by Cancer Council Queensland, involved 57 people undergoing a series of skin biopsies to determine molecular changes to the skin before and after UV exposure and with and without sunscreen.

"Firstly we took small skin biopsies of people's unexposed skin. We then exposed two skin sites to a mild burning dose of UV light, one site was applied with sunscreen and the other was not. We again took biopsies of both sites.

"After 24 hours, we took another set of biopsies and compared the skin samples.

"What we found was that, after 24 hours where the sunscreen had been applied, there were no DNA changes to the skin and no impact on the p53 gene," she said.

Dr Hacker said this was a significant finding.

"In Australia we have strong standards around sunscreens and their ability to protect against erythema (redness of skin)," Dr Hacker said.

"But this research looks beyond the redness to determine whether UV exposure when using sunscreen causes molecular changes to the skin, as these changes have been linked to BCC, SCC and malignant melanoma.

"When there are changes in the molecular structure it can enhance skin cancer development."

Dr Hacker said the study also provided a baseline measurement of molecular responses to UV exposure, which would now be used to investigate post-sun exposure treatments, such as super sunscreens, to assist in the repair of sun damaged skin.

Dr Hacker is a member of the Institute of Health Biomedical Innovation.

Cancer Council Queensland spokesperson Katie Clift said the research reinforced the SunSmart message in Queensland - which has the highest rates of skin cancer in the world.

"It's imperative that all Queenslanders adopt SunSmart habits every day that they're out and about in the Sunshine State, no matter the season," Ms Clift said.

"Applying sunscreen correctly is important. Adults should apply more than half a teaspoon of sunscreen to each arm and the face, neck and ears - and just over one teaspoon to each leg, and front and back of the torso.

"It's also important to complement sunscreen with sun protective clothing, a broad-brimmed hat, to seek shade and slide on wraparound sunglasses for best protection."

The study, The effect of MC1R variants and sunscreen on the response of human melanocytes in vivo to ultraviolet radiation and implications for melanoma, is available at http://onlinelibrary.wiley.com/doi/10.1111/pcmr.12157/abstract