World-first research will save koalas 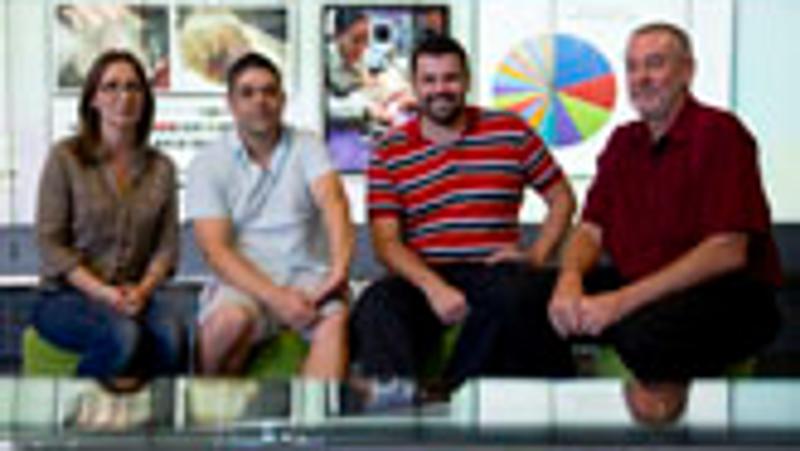 The "holy grail" for understanding how and why koalas respond to infectious diseases has been uncovered in an Australian-led, world-first genome mapping project.

The joint undertaking between QUT and The Australian Museum has unearthed a wealth of data, including the koala interferon gamma (IFN-g) gene - a chemical messenger that plays a key role in the iconic marsupial's defence against cancer, viruses and intracellular bacteria.

Professor Peter Timms, from QUT's Institue of Health and Biomedical Innovation (IHBI), said the IFN-g gene was the key to finding a cure for diseases such as Chlamydia and Koala Retrovirus (KoRV), currently threatening the vulnerable species.

"We know koalas are infected with various strains of Chlamydia, but we do not know why some animals go on to get severe clinical disease and some do not," Professor Timms said.

"We also know that genes such as IFN-g are very important for controlling chlamydial infections in humans and other animals. Identifying these in the koala will be a major step forward in understanding and controlling diseases in this species. "

Watch ABC's coverage of the event below

The research team - made up of Professor Timms, Dr Adam Polkinghorne, Dr Ana Pavasovic and Dr Peter Prentis from QUT; The Australian Museum; veterinarians from Australia Zoo and the Port Macquarie Koala Hospital; and bioinformaticians from Ramaciotti Centre and UNSW - have sequenced the complete transcriptome from several koala tissues.

Dr Polkinghorne from QUT's School of Biomedical Sciences said data sets from immune-related tissues of Birke, a koala who was euthanized following a dog attack, have revealed a wealth of information about the species' immune system including the sequences of at least 390 immune-related genes.

"Virtually nothing is known about the immune system of the koala and the absence of information has been a major hinderance to our efforts to understand how Chlamydia and KoRV infections lead to such debilitating disease in this native species," he said

Since finding the 'holy grail' the QUT team has developed a molecular test to measure IFN-g expression in the blood of healthy and diseased koalas, which has already been applied to a small group of wild koalas taken to the Australia Zoo Wildlife Hospital suffering ocular and reproductive tract disease.

The results will allow researchers to pull apart the complex immune response to better understand how to successfully treat and immunise the vulnerable koala population.

The genes, which only represent about 1.8 per cent of the total set identified in the tissues, were involved in B cell and T cell activation and antigen presentation - key components of the adaptive immune response suggesting that koalas have the capability to protect themselves against microbial pathogens, such as Chlamydia.

Professor Timms' team, who are currently trialling a Chlamydia vaccine for koalas in South East Queensland, said the koala transcriptome data also provided evidence that the KoRV virus's genes were not just circulating in the blood, but were also fused to some of the animal's own genes.

"By analysing this information we should be able to determine if KoRV is sitting harmlessly in these koalas or if it's potentially triggering cancer or resulting in mild Chlamydia infections becoming a serious clinical disease," Professor Timms said.

The finding will also help researchers understand why Queensland and New South Wales koala populations have been crippled by the spread of Chlamydia while Victorian populations are much less unaffected.

The project will also aid the conservation of other Australian wildlife, with the team of researchers revealing that the majority of koala sequences shared similarities to that of the Tasmanian Devil.

"While this finding alone is not that surprising, it does show that the immune genes of marsupials are fairly closely related," Dr Polkinghorne said.

"This promises to benefit gene discovery and the development of immunological tools that will help us to fight diseases in our other threatened and endangered wildlife species."

While the consortium already contains more than 12 scientists, veterinarians and bioinformaticians, Professor Timms said the team had only scratched the "tip of the iceberg".

"The task is much larger and will require many more people to assist with analysing the data," he said.

"Funding to date has resulted in a rich koala genetic bank, but it will fall short if we are to use this data to answer key koala survival questions.

"It is planned to expand the consortium and hold a workshop to develop the best approaches to analysing the data and hence ensure the continued survival of this iconic species."

The Australian Koala Genome Mapping Program was funded by QUT, The Australian Museum, Bioplatforms Australia and the State and Federal Governments.

To support ongoing research in koala health make a donation here. Enter "Koala Genome Mapping Project" into the 'other field'.