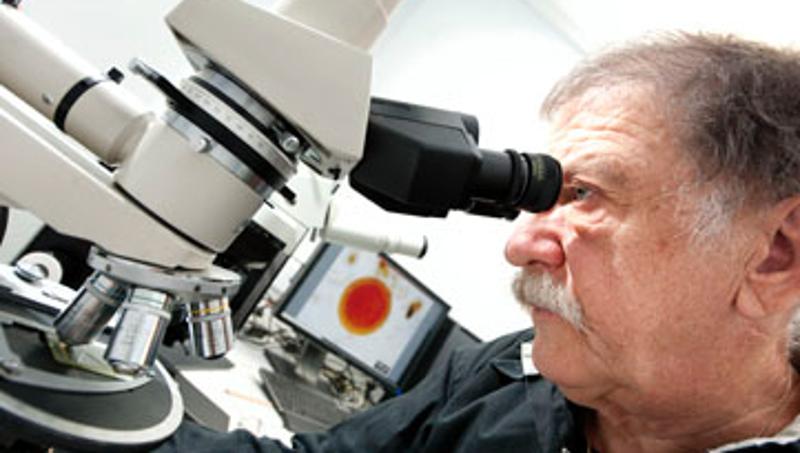 A stunning discovery by QUT soil scientist Marek Zbik of nano particles inside bubbles of glass in lunar soil could solve the mystery of why the moon's surface topsoil has many unusual properties.

Dr Zbik, from Queensland University of Technology's Science and Engineering Faculty, said scientists had long observed the strange behaviour of lunar soil but had not taken much notice of the nano and submicron particles found in the soil and their source was unknown.

Dr Zbik took the lunar soil samples to Taiwan where he could study the glass bubbles without breaking them using a new technique for studying nano materials call synchrotron-based nano tomography to look at the particles. Nano tomography is a transmission X-ray microscope which enables 3D images of nano particles to be made.

"We were really surprised at what we found," Dr Zbik said.

"Instead of gas or vapour inside the bubbles, which we would expect to find in such bubbles on Earth, the lunar glass bubbles were filled with a highly porous network of alien-looking glassy particles that span the bubbles' interior.

"It appears that the nano particles are formed inside bubbles of molten rocks when meteorites hit the lunar surface. Then they are released when the glass bubbles are pulverised by the consequent bombardment of meteorites on the moon's surface.

"This continuous pulverising of rocks on the lunar surface and constant mixing develop a type of soil which is unknown on Earth."

"Nano particles are so tiny, it is their size and not what they are made of that accounts for their exceptional properties.

"We don't understand a lot about quantum physics yet but it could be that these nano particles, when liberated from their glass bubble, mix with the other soil constituents and give lunar soil its unusual properties.

"It is also very sticky and brittle such that its particles wear the surface off metal and glass."

Dr Zbik said the moon had no atmosphere to cushion the impact of meteorites like Earth had.

"When they hit the moon there is a very violent reaction. Huge temperatures are generated which melts the rock. The pressure goes and a vacuum is created. Bubbles occur in the molten glass rock like soft drink bubbles trying to escape the bottle.

"Our work now is to understand how those particles evolve from this process. It may also lead us to completely different way of manufacturing nanomaterials."

Dr Zbik and his research team's study was published in the International Scholarly Research Network Astronomy and Astrophysics.

** High res photo of Dr Zbik available for media use.