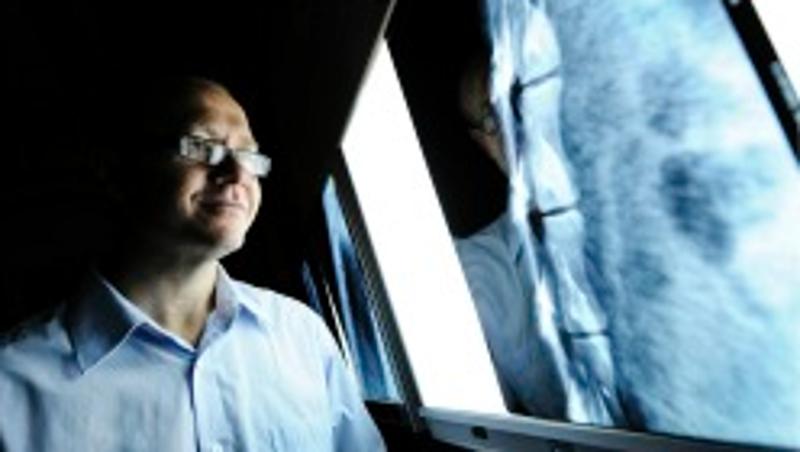 Queensland University of Technology (QUT) researchers have developed a promising new treatment for spinal cord injury in animals, which could eventually prevent paralysis in thousands of people worldwide every year.

Dr Ben Goss, from the Institute for Health and Biomedical Innovation (IHBI) at QUT, is part of a research team investigating how to prevent the spinal cord from degenerating after an injury.

"The initial injury to the spinal cord is much like a bruise," he said.

"However, unlike ordinary bruises the spinal cord has a persistent inflammatory response that leads to further damage.

"Our research is looking at the effects of adding proteins, also known as growth factors, to the spinal cord to reduce or switch off the inflammation and prevent secondary neurological damage."

The treatment, which combined vascular endothelial and platelet-derived proteins, was applied to animals immediately after a spinal cord injury and evaluated after one and three month periods.

Dr Goss said researchers, including from Griffith University, found the size of the lesion caused by the spinal cord injury was significantly smaller in the treated group compared to animals that did not receive treatment.

He said there was also significantly less damage to tissue around the spinal cord injury after the new treatment.

"This study has demonstrated for the first time a treatment can reduce or eliminate secondary degeneration after traumatic injury to the spinal cord," Dr Goss said.

"At present spinal cord injury is permanent and irreversible, but I believe our research has the potential to improve outcomes and this might be the first step to achieving a cure."

The research, published in the Journal of Neurotrauma, could help 30,000 people worldwide, including about 400 Australians, who sustain spinal cord injuries every year.

About 9000 Australians live with disabilities caused by spinal cord damage, with road accidents causing nearly half of such injuries in Australia.

Dr Goss said The Walk Again Society, which funds spinal cord injury research, is raising money to support the project, which is eventually hoped to include clinical trials.

In addition to the research, a new Brisbane-based spinal cord injury registry to start within the next month will improve treatment and rehabilitation for patients.

QUT and Princess Alexandra Hospital will lead the Queensland-Canada Spinal Cord Injury Alliance, in partnership with the Rick Hansen Institute in Canada, one of the world's leading spinal cord injury research centres.

The registry is a coup for Queensland and Australia, which will be the first international contributor to the Rick Hansen Spinal Cord Injury Register.

The alliance received a $1million Queensland Government Smart State grant to foster international research partnerships to improve the delivery of quality care and treatment of people with spinal cord injuries.

Dr Goss said researchers would compare Canadian and Queensland health systems to find ways to improve how quickly people with spinal injury were taken to hospital and received treatment.

"Evidence shows that faster treatment is vital to better outcomes for patients," he said.

"With this registry we can develop better treatments or therapies for people living with spinal cord injuries and then follow a person's progress over their life time."