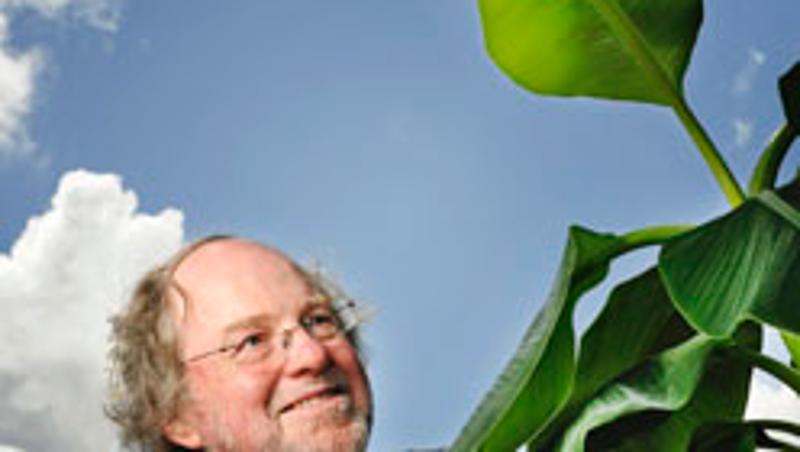 Queensland University of Technology (QUT) scientists have genetically modified a trial crop of banana plants to survive a soil-borne fungus which has wiped out plantations in the Northern Territory and is threatening crops across the globe.

Professor James Dale, director of the Centre for Tropical Crops and Biocommodities based at QUT, said the destruction of crops in Queensland by Tropical Cyclone Yasi proved just how important it was to have a back up available.

Professor Dale said if genetically modified plants could overcome the disease, known as Tropical Race Four, it would act as an insurance policy to supply resistant plants in the event that the disease moved into the banana production areas in north Queensland.

He said Tropical Race Four attacked Australia's favourite banana plant, the Cavendish, inside and out.

"It is caused by a fungus in the soil called Fusarium and causes the leaves to wilt and rots the inside of the plant," Professor Dale said.

"The disease has swept through much of Asia and is also found in the Northern Territory.

"From Australia's perspective the biggest concern is that the disease will find its way from the Northern Territory to North Queensland and if that occurs it would severely impact the nation's Cavendish banana industry."

Professor Dale, who leads a team of a dozen researchers, has been awarded $750,000 from the Australian Research Council to plant four acres of genetically modified bananas in diseased soil in the Northern Territory.

"We are planning to take the plants up in April and get them acclimatised to the Darwin weather. We'll be looking at the first planting around June and we'd be hoping to be able to gauge their resistance as early as the first half of next year," he said.

Professor Dale said for banana farmers the disease was devastating.

"The disease is known to harm only banana plants and can survive in the soil for decades. The worst thing is it can't be controlled with chemicals."

He said as part of the genetic modification, a gene capable of starving the fungus to death had been inserted into the plant.

"For years it has been thought that the fungus injected toxins into the plant, killing cells and gorging on the waste," he said.

"Our thinking is that we can insert a gene that inhibits this process, starves the fungus and tells the plant to not kill itself."

Professor Dale said there was a great fear that Tropical Race Four disease would reach Latin America, making the disease a global threat.

"This project has significance on an international scale," he said.

"If we can prove genetically modified bananas can be resistant to this disease, we can make a huge contribution to the future of banana production worldwide."