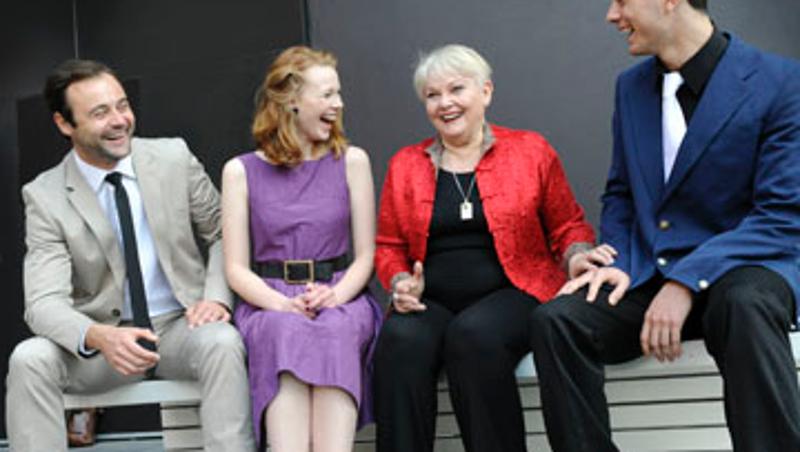 Working with QUT acting students has invigorated two of Australia's best actors - Gyton Grantley and Diane Cilento - who today launched a program to share actors' secrets of success with the university's acting and creative industries students.

The award-winning stars are the debut "artists in residence" for QUT's Creative Industries Faculty and have been working closely with students all week, including guest lectures to students today Thursday (September 9).

For Gyton Grantley, it's a return home to his alma mater. He graduated from QUT's prestigious Bachelor of Arts (Drama) degree in 2001. The course (now called Bachelor of Fine Arts - Acting) only takes a handful of acting hopefuls each year and counts actors Deborah Mailman (The Secret Life of Us) and Michael Dorman (2010 science fiction horror movie Daybreakers) among its successful stars.

Gyton won a 2008 AFI Award, as well as the 2009 Silver Logie, for his role as criminal Carl Williams in the first Underbelly series. Grantley has filmed his last three movies in Queensland, including the upcoming horror-thriller release The Reef (which follows Balibo and Beneath Hill 60).

It's a busy time in the booming career of Gyton who is auditioning for more movies and is planning to head to the U.S. to have his first serious attempt at launching his career in the world's most competitive movie market. He has a series of meetings planned with key American film industry people and is hoping this will lay the foundation to give him his big break in the U.S. market.

Gyton said despite being an acting addict from an early age, the trials of the industry had recently become burdensome, but working with the QUT students helped relight his passion's flame.

"You have no idea what this week has done for me," Gyton told students at the launch.

"You've reminded me why I'm doing this; because it feels good.

"When you leave here, you will no longer be surrounded by the support of your teachers and other students, you are going to have to work to keep up your passion.

"When you express your love, your passion for acting, the world will feel it with you."

Diane Cilento's theatre and film career has spanned six decades and includes being nominated for an Academy Award for her role in the 1963 film Tom Jones. She has appeared on screen with actors including Paul Newman, Albert Finney and her former husband Sean Connery.

Diane was born in Mooloolaba on the Sunshine Coast and has lived in North Queensland since the 1980s, where she runs the Karnak outdoor rainforest theatre, a unique centre for the arts. She is also about to embark on an international tour with a new one-woman show, Woman Before a Glass, about the life and times of art icon Peggy Guggenheim, from which she performed a small extract of the script.

Diane said Brisbane's art scene and acting talent had come a long way over the past decades.

"I have been incredibly surprised by the intensity and desire behind the young people here (at QUT)," Diane said.

QUT head of acting, Dianne Eden, said experienced artists such as Diane Cilento and Gyton Grantley were the perfect choice to complement the work of university lecturers to fully prepare young actors for their future careers.

"Diane Cilento brings more than just knowledge to the students," said Ms Eden . "She loves her life as an artist and she loves her work. She can guide students about how she did it and ways of following their dream and avoiding penury.

"Diane is ageless and Gyton Grantley speaks with the wisdom of years in the business. While he is here Gyton will be auditioning for his next role via his hotel room on SKYPE. That's the future for actors."

This year marks the first year of the new QUT Creative Industries Artist in Residence Program, which will bring leading national and international actors and directors to the university each year to share their skills with students studying courses including acting, drama, technical production and writing.

The program is supported by QUT's Rainbow Reid Endowment Fund - a philanthropic fund led by Australian actress Lynn Rainbow Reid which has gained support from arts patrons across Australia.

QUT Vice-Chancellor Professor Peter Coaldrake said the endowment fund would ensure that future generations of students benefitted from the artist in residence program.

"It's a wonderful way for people who feel a close connection to the performing arts to give back to the education of our future stars," Professor Coaldrake said.