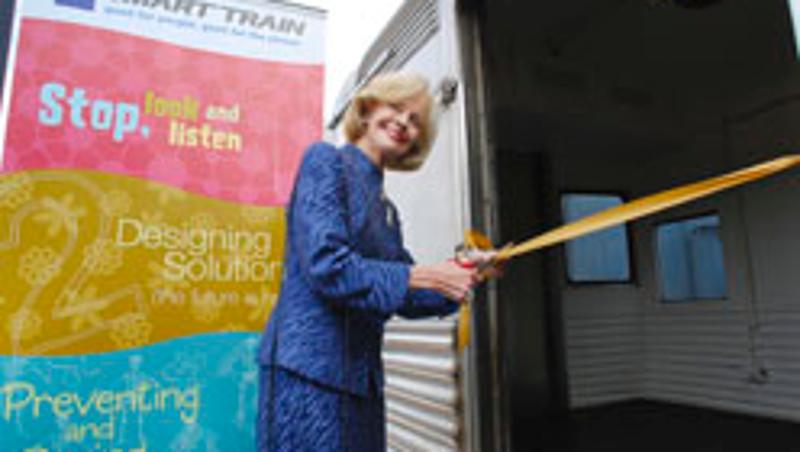 Up to 20,000 school children will get to experience science and technology first-hand when the QUT Smart Train travels around the State.

The 10,000 kilometre journey will make 24 scheduled stops in rural and regional Queensland during its five week tour from May 9- 13 June.

Regional communities will get to see how science and technology shape the real world such as the latest research into biofuels, how to farm smarter and look after soil, and the impact of carbon on the environment.

Governor of Queensland, Her Excellency Ms Quentin Bryce AC, officially launched the Smart Train at the historical Workshops Railway Museum at Ipswich on Friday May 9.

Students can learn about researchers using mobile phones to collect information about birds around the Brisbane airport, read about planes that fly themselves and be able to check out a robotic telescope that can be used to safely explore the sun.

QUT Executive Dean of Science Professor Margaret Britz said it's an opportunity to demystify science and technology and educate children about today's health and environmental issues.

"For example students can learn how to extract DNA from fruit using a simple recipe, can take a bone quiz, build a spinal column and participate in a happiness survey," she said.

QUT Vice-Chancellor Professor Peter Coaldrake said even though QUT was city-based, the university had a long commitment to rural and regional Queensland.

"We have several thousands of students at QUT who come from the regions," Professor Coaldrake said.

"The QUT Smart Train gives us an opportunity to reach out to kids from an early age with messages about the value of science and technology and maybe even influence their future careers."

It's the fifth train to travel throughout the State continuing a highly successful program started by QUT more than 10 years ago.

The train will stop at Toowoomba, Roma, Mitchell, Charleville, and Chinchilla.
Then head north to Nambour, Gympie, Maryborough, Bundaberg, Gladstone, Emerald, Longreach, Barcaldine, Rockhampton, Mackay, Townsville, Cloncurry, Mount Isa, Richmond, Charters Towers, Cairns, Ingham, Ayr, Proserpine and finish at Roma Street, Brisbane where it will be open to the public for a week.

All details and dates can be found on the QUT Smart Train website
www.train.qut.edu.au