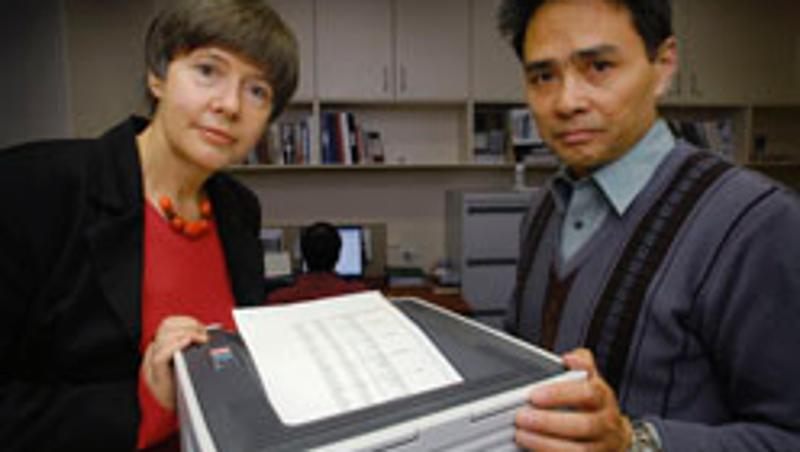 The tiny particles emitted from some home or office laser printer are as dangerous to human health as inhaling cigarette smoke, according to a new study by Queensland University of Technology.

The study, which was conducted by Professor Lidia Morawska from QUT's International Laboratory for Air Quality and Health, found that out of 62 laser printers tested, 17 were "high particle emitters".

The results of the study are being published in the latest edition of the American Chemical Society's Environmental Science and Technology journal.

"The health effects from inhaling ultrafine particles depend on particle composition, but the results can range from respiratory irritation to more severe illness such as cardiovascular problems or cancer."

Professor Morawska said the study, conducted in a large open-plan office building, found indoor particle levels in the office air increased fivefold during work hours due to printer use.

"Printers are a common device in both the home and office environment," she said.

"However, they are a potential source of indoor pollutants producing volatile organic compounds and ozone, as well as particle emissions.

"This study showed that printers were the most significant source of particle number concentrations in the office building."

Professor Morawska said in general the study found that printers emitted more particles when the toner cartridge was new, and when printing graphics and images as they require greater quantities of toner.

"It appears that there are large differences in the emission levels between different types of printers," she said.

"Many factors, such as printer model, printer age, cartridge model and cartridge age may affect the particle emission process."

"Governments regulate emission levels from outdoor devices such as vehicles, power stations and factories, so why not for printers?" she said.

"Until something is done, I suggest that people ensure rooms in offices and homes are well ventilated to allow the airborne particles to disperse."