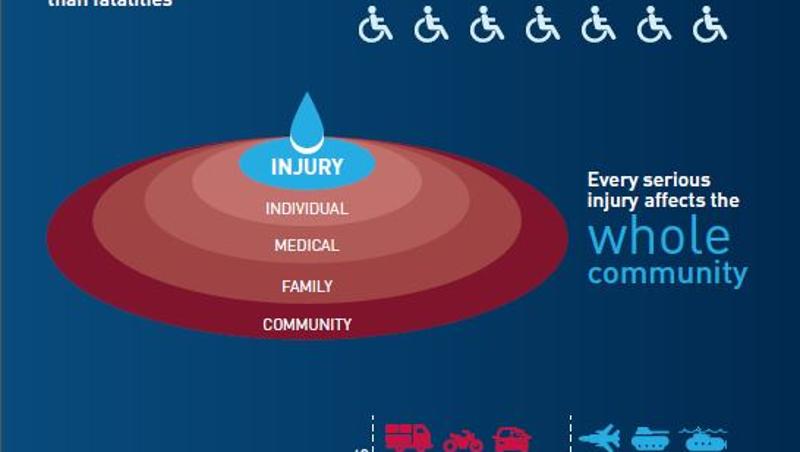 Australia needs to stop counting the dead and start counting the injured if road safety is to be improved, said QUT Professor Narelle Haworth during the United Nations Global Road Safety Week which runs from May 8-14.

Professor Haworth, director of QUT’s Centre for Accident Research and Road Safety – Queensland (CARRS-Q), said fatalities were the tip of the iceberg and hid the true magnitude and nature of road trauma.

“While every death is tragic, about 30 people are hospitalised for every person killed and the human and economic impact of serious injuries is greater and more widespread than that of fatalities,” she said.

“Focussing on the road toll is misguided. It shapes the views of both policymakers and the public, and leads to a distorted picture of what needs to be done to improve road safety.”

“Similarly about 50 per cent of fatal crashes occur in 100km/h speed zones while serious injuries are more likely to occur in speed zones of 60km/h or less,” she said.

“Motorcyclists, bicycle riders and pedestrians make up the greatest proportion of people admitted to hospital than those killed.

“Basing our road safety response on what we see in fatalities will result in misdirected perceptions and policies.”

Professor Haworth said Australia was no longer an international leader in road safety.

“Our vehicles are not as safe as those in the best-performing countries.

“We have many older vehicles and even many new vehicles don’t have the safety features required in other countries.

“Our most vulnerable drivers - the young - are often in the poorest standard vehicles.”

Professor Haworth said the best-performing countries had realised that speed limits need to be set in relation to the safety features of the road, and who was using the road.

“This is so the crashes which do occur – because we are humans and make mistakes – don’t result in death or serious injury.  We have yet to adopt this practice,” she said.

“Let’s stop talking about the road toll and focus on dealing with the factors that contribute to serious injuries and fatalities.”

This event will provide the opportunity to remind the community about sharing the road to improve interaction between all road users.  As part of the event, there will be face painting, a sausage sizzle and cupcakes, together with interactive displays by RACQ, Kidsafe, Queensland Ambulance Service and Queensland Police.