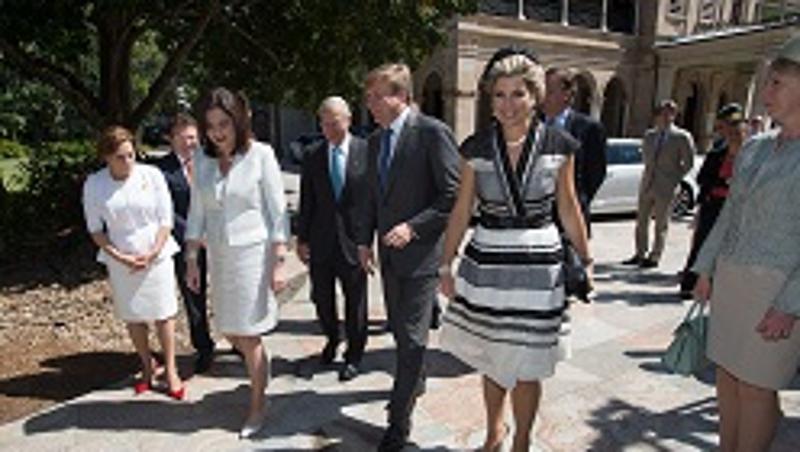 Their Majesties King Willem-Alexander and Queen Máxima of the Netherlands have visited QUT to launch a flood management tool and summit that could help protect their country and Queensland.

The Dutch royals, making their first visit to Australia since taking the throne, were shown the Smart Scanner for Water Resilient Cities, developed by QUT’s Dutch collaborators Deltares and HydroNET, during their visit to QUT’s Gardens Point campus.

The King and Queen were shown a heavy rainfall event in the riverside Brisbane suburb of West End and the Smart Scanners’ ability to provide a rapid assessment of the potential impact.

The Smart Scanner, which can be adapted to any location in the world, will help inform decision making about urban planning, adaptation and flood mitigation as well as educate communities on the benefits of key future changes.

The visit of the King and Queen coincides with the Resilient Urban Deltas and Floodplains Water Summit at QUT and stems from ongoing collaboration between the Netherlands and Queensland on flood adaptation and mitigation strategies.

With 55 per cent of its territory below sea level, the Netherlands is vulnerable to flooding and a global leader in flood management. Queensland’s susceptibility to flooding was highlighted during the 2010/11 floods, when 33 people died and three-quarters of the state was declared a disaster zone.

“We were honoured to host Their Majesties King Willem-Alexander and Queen Máxima at our world-class Science and Engineering Centre,” Mr Fairfax said.

“Queensland and the Netherlands have both experienced the devastation flooding can cause and flood adaptation and mitigation is a serious challenge for many communities around the world. Mutually beneficial collaborations like those between QUT, Queensland and the Netherlands are crucial for providing innovative solutions to support those at risk.”

Following the launch of the Smart Scanner, the King and Queen were shown the Flood Wall, an interactive storytelling of the 2010/11 Brisbane floods, and Dino Zoo, an installation of life-sized, artificially intelligent dinosaurs, on The Cube. They also launched the fourth edition of the Australia-Netherlands Water Challenge, a national competition inviting students and young professionals to devise original ideas for water management.