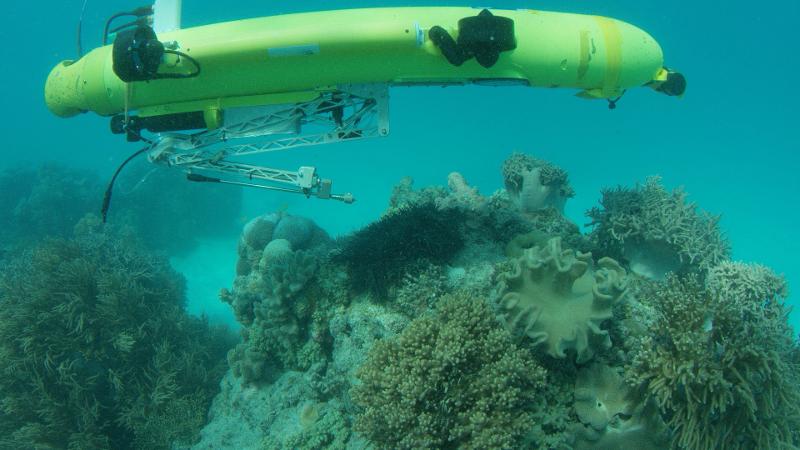 It’s the first robot in the world proven to control marine pests and the first ever built with an injection system.

“It’s always great to see a robot you built let off the leash, so to speak, doing the job it’s intended for,” said Dr Dunbabin, from QUT’s Institute for Future Environments and Science and Engineering Faculty.

“We couldn’t be more ecstatic about how COTSbot has performed. The next generation will be even better and hopefully we can roll it out across the reef relatively quickly.”

COTSbot spent much of the trials tethered to a wifi-enabled boat beaming data back to the researchers, allowing the team to see through the robot’s cameras, verify every COTS it identified, and approve injections before they happened.

Once it proved it could work well under human supervision, the researchers monitored its autonomous efforts.

“The robot’s detection rate is outstanding, particularly because COTS blend in very well with the hard, corals they feed on, and because the robot must detect them in widely varying lighting conditions and shapes as they hide among the coral.

“When it comes to accurate detection, the goal is to avoid any false positives – that is, the robot mistaking another creature for a COTS. Our detection is extremely precise – it’s consistently reliable.”

COTSbot is designed to support existing human-powered COTS control methods, sweeping an area for the majority of the pests and leaving the hard-to-reach starfish for the specialist divers who follow.

COTS are responsible for an estimated 40 per cent of the Great Barrier Reef's total decline in coral cover.

Environmental robotics is a passion for Dr Dunbabin, who cites building a robot to operate effectively in highly complex reef environments, as one of the project’s great triumphs.

“It’s quite a challenge to pack a full-service vision and machine learning system into a very small robot in the field. Without a link to the outside world, all processing is done on board COTSbot,” Dr Dunbabin said.

The researchers are already working with the Great Barrier Reef Foundation to transform COTSbot into RangerBot - a multipurpose, multifunction robot for monitoring a wide range of issues facing coral reefs across the globe – coral bleaching, water quality, pest species, pollution and siltation included.

The Foundation is currently vying for a $750,000 Google Impact Challenge prize. If it wins, the team will use the funds to develop the new platform and make it affordable to people and communities on the front line of coral reef management.

Foundation Managing Director Anna Marsden encouraged the public to vote for the RangerBot before the 26 October deadline.

“The RangerBot will be a step change in technology – it thinks, it sees, it acts – it’s unlike anything else currently available and will be a fantastic tool for those who look after reefs worldwide,” Ms Marsden said.

“We can see this technology having the same impact on reef conservation as the drone has had on land conservation.

“The Great Barrier Reef Foundation champions innovation, looking for gaps for what is needed and RangerBot completes a missing piece in the puzzle need to help protect our reef.”