The Alumni Service Award was introduced in 2005 to recognise outstanding voluntary leadership and advocacy of the interests of alumni and the broader QUT community.

While generally awarded at the QUT Alumni Annual General Meeting and Volunteer Reception, it was only fitting for Tracey to receive the award at the Fund’s Riverfire celebration, which she was hosting as a volunteer for the 10th consecutive year.

Awarded to only the most outstanding supporters, Tracey is the 23rd recipient in the award’s history, recognised primarily for her advocacy for the QUT Learning Potential Fund, which provides scholarships to students whose financial circumstances might prevent them from pursuing higher education.

“Every recipient of the Learning Potential Fund has a different story to tell. The Fund transforms the lives of thousands of students every year,” said Tracey.

“It’s heartbreaking to think where these students might be without the help of the Fund.” Graduating in 1987 from a Bachelor of Business (Communication) at QUT’s predecessor institution, Queensland Institute of Technology, Tracey quickly became a well-respected journalist through her various roles in print, radio and television – including leading national news programs and now as an anchor for ABC’s The Drum, and columnist for Fairfax Media.

In the public speaking arena, Tracey made headlines in 2014 with her TEDx Talk: The lady stripped bare, and works as a speaker at a range of events in addition to her media commitments.

Tracey’s alumni connection with the university began in 2006 when she began attending alumni events in Sydney, and was soon approached to be a keynote speaker. It was after joining the inaugural Learning Potential Fund Committee in 2007 that she took on the hosting role for the Fund’s signature Riverfire event, also acting as Master of Ceremonies for the Outstanding Alumni Awards (2013-2015) and the QUT 25th Anniversary Gala Dinner (2014). 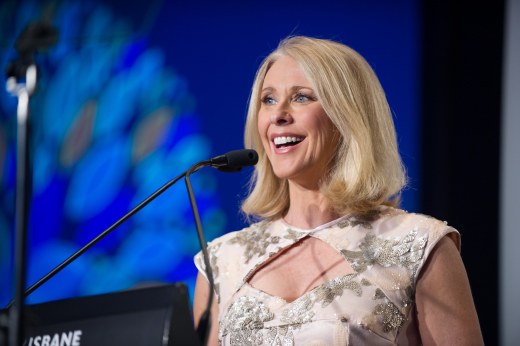 QUT Director of Alumni and Development, Simone Garske, said that Tracey’s contributions often went above and beyond.

“Tracey is well-known for is known for saying yes when members of the QUT community call upon her and ask for her help – whether it be to join a committee, MC a ceremony, or share what’s been happening at QUT with her network,” says Ms Garske.

“Ambassador, donor, advocate, supporter and friend are just a few of the words used to describe her – we are so proud to be able to recognise her contribution with this award.”