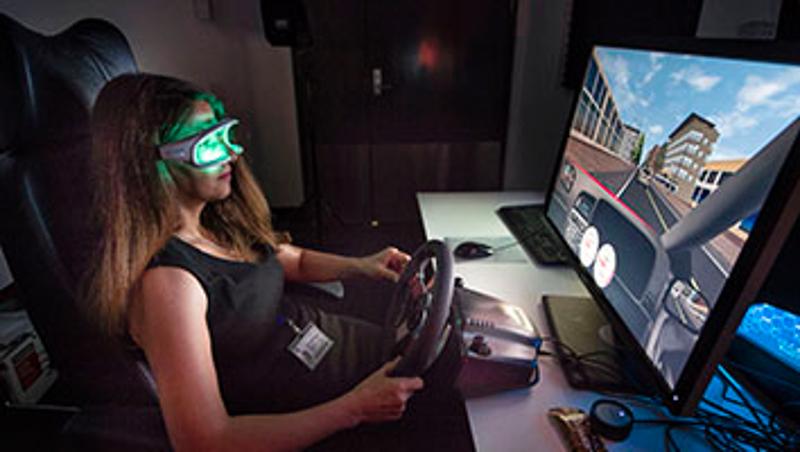 CARRS-Q and Griffith University co-hosted the event which brought together international experts from across the globe to share the latest in road safety research with the aim of reducing road trauma.

As part of her PhD, Dr Shekari tested the novel and potentially effective use of bright light, using commercially available light glasses that emit a shortwave blue-green light, and caffeinated chewing gum on young drivers aged 18-25 in a driving simulator to see if it increased alertness during daytime driving.

“Light therapy is being used to adjust a person’s circadian rhythm in shift workers and pilots and offers the potential to reduce sleepiness,” she said.

“The study found there was a significant effect on driving performance, mostly when caffeine was used alone or combined with light.

“Drivers who were given just caffeine, or light and caffeine together had decreased side to side movement of the steering wheel and the vehicle, indicating better control of the vehicle and higher alertness.

“Drivers who were feeling some signs of sleepiness after sleep loss, felt less sleepy after receiving either light or caffeine, and even felt rather alert after receiving the combination of both.”

Dr Shekari said the two-week study included monitoring sleep-wake patterns, with a normal eight hours of time in bed in the first week being reduced by to seven hours in the second week to produce chronic sleep deprivation in the participants.

“On the last three days participants took test sessions which involved recording their brain and heart activity, reaction times, assessment of their sleepiness and two 50km-long simulated drives each day,” she said.

Dr Shekari said driver sleepiness accounted for 20 per cent of all crashes in developed countries, and young drivers were at an increased risk of chronic sleep deprivation.

“This is due to later brain development and social factors such as friends, work patterns and increased use of drugs and alcohol, all of which impact on sleep,” she said.

Dr Shekari said while her study had revealed promising results of the use of light and caffeine to improve driver alertness, more research was needed.