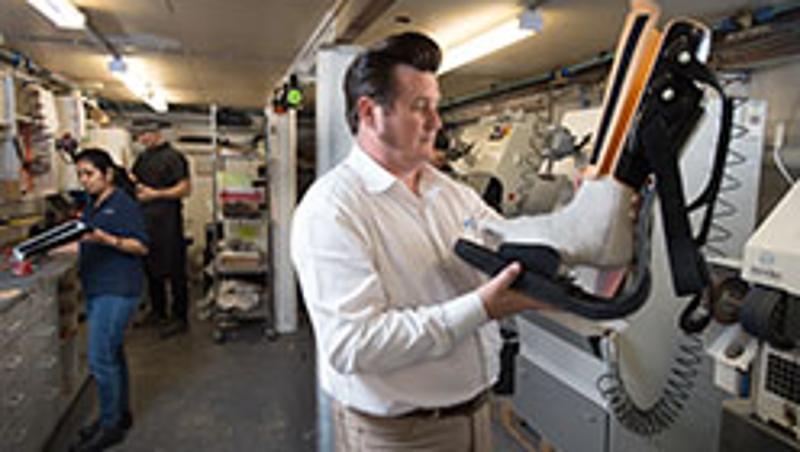 A pioneer in the field of podiatry, Greg Dower, was named the winner of QUT’s Outstanding Alumni Award for the Faculty of Health in addition to receiving a special excellence award at a ceremony in Brisbane today.

Mr Dower is widely recognised for his significant contributions to the field of podiatry, having co-founded Australia’s largest podiatry group my FootDr and pioneered computer-aided design and manufacture of orthotic devices.

The annual QUT Outstanding Alumni Awards recongise outstanding graduates of the university (and predecessor institutions), who have displayed exceptional professional, academic or research achievements and contributions to the community.

After graduating from QUT in 1992 with Bachelor of Applied Science (Distinction) Podiatry, Mr Dower went on to play an integral role in the establishment of my FootDr, which is a podiatry group treating more than 75,000 patients across 20 clinics in Australia, Singapore, Indonesia and China.

His entrepreneurial spirit and enthusiasm for excellence in clinical outcomes has seen him advance podiatric technologies that have been adopted worldwide.

For example, Mr Dower led the way in the computer-aided design and manufacture of orthotic devices, which revolutionised his practice and has since been adopted by almost every podiatry practice in the world.

In 2009, Mr Dower identified a game-changer in the treatment of onychomycosis (fungus nails), leading the development of laser nail surgery.

His investment and early adoption of this technology resulted in improved patient outcomes and has driven the entire podiatric profession forward. He also co-developed the world’s first rotational 3D foot scanner for complex medical grade footwear.

A large part of Mr Dower’s work has been aiding the Institute of Urban Indigenous Health’s (IUIH) Podiatry program, through accessing leading technology and footwear provision for 30,000 Aboriginal and Torres Strait Islander individuals.

Committed to the profession, Mr Dower has maintained ties with QUT and works as a clinical supervisor, guest lecturer and curriculum review panel member. He has also trained and mentored more than 100 QUT podiatry students.

Mr Dower holds the position of chair as State Representative for the Australian Podiatric Sports Medicine Association and was nominated as Ernst & Young’s 2015 Entrepreneur of the Year.