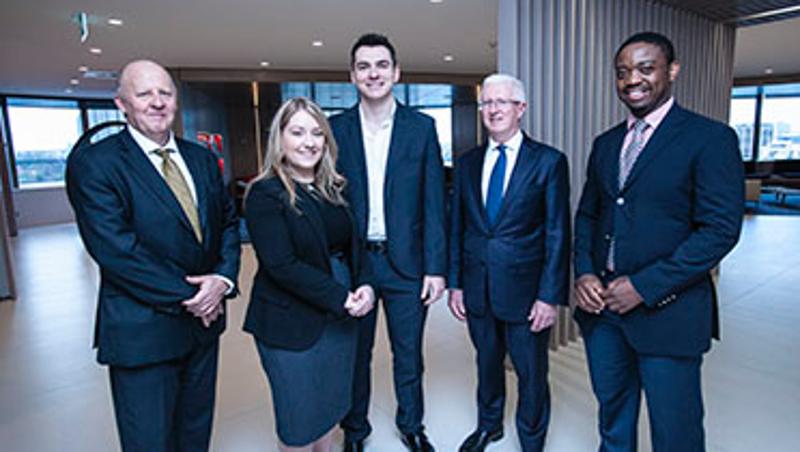 The Brisbane office of global accounting firm BDO has become the first business organisation to partner with QUT in creating scholarships for disadvantaged QUT students, leading the way in corporate philanthropy.

"The scholarships will be funded by our staff through the BDO Workplace Giving Program and the company will match their donations," said Mr Curran.

"Part of our inspiration to set up the scholarships was after hearing the story of QUT business and law student Josh Maguire, who is a QUT Learning Potential Fund Student Ambassador.

"There's a lot of enthusiasm amongst BDO staff with more than 180 of them QUT alumni.

"BDO has long contributed to charitable organisations and provided pro bono services, but this is the first time we have created a formal scholarship program. It also builds on our existing relationship with QUT.

"Nelson Mandela once said 'education is the most powerful weapon which you can use to change the world' and these scholarships have been created in that spirit."

Professor Scott Sheppard, QUT Deputy Vice-Chancellor International & Development said the QUT Learning Potential Fund was established in 1998 and has since disbursed more than 24,000 scholarships. The largest such fund in Australia, every dollar raised is matched by QUT.

"This is a wonderful initiative of BDO partners and staff. I think Australian corporations are starting to embrace philanthropy and I hope that BDO's generosity will inspire others from the big end of town," Professor Sheppard said.

"Each year the Learning Potential Fund can only help half of the 4,000-plus students who need support which is why BDO's generosity is so welcome. They can give students a brighter future."

One such student is Samantha who this year graduates with a Bachelor of Justice/Bachelor of Laws.

With the help of the QUT Learning Potential Fund she and twin sister became the first members of their family to attend university. The Fund helped again when during her fifth year of study Samantha needed to help look after her mother while she was being treated for breast cancer.

"Beyond the financial assistance a Learning Potential Fund Scholarship provides, receiving one says that other people, strangers, care enough and recognise our potential to the extent that they are willing to invest their own money to assist students facing adversity to realise our dreams," said Samantha who is majoring in criminology.

"My sister and I were picking grapes to help pay for our relocation from Goodnight Scrub near Bundaberg to Brisbane when Mum rang to say we got the scholarship and it gave us such hope.

"For me the QUT Learning Potential Fund stands out for two reasons: its inherent ability to recognise true need and more importantly, its ability to inspire recipients."