Jed’s a master of his own journey 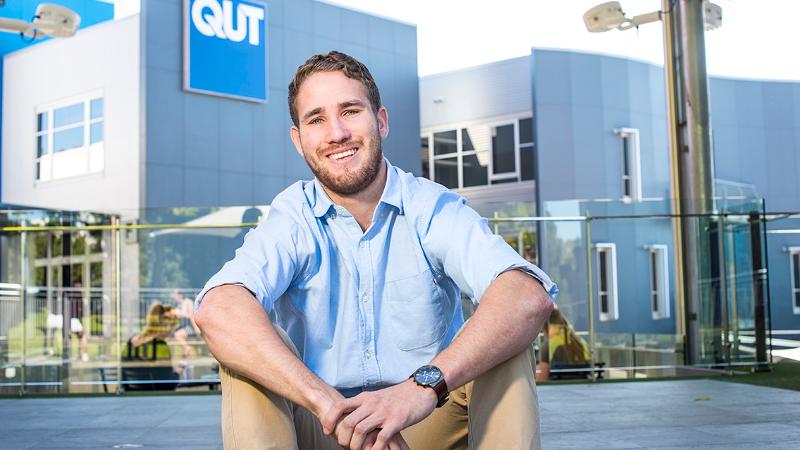 The QUT Bachelor of Exercise and Movement Science graduate is featured in a new publication, My Story – Student Voice, released by the National Centre for Student Equity in Higher Education (NCSEHE).

It shares 17 stories about students and graduates from universities across Australia who have opened up about overcoming significant challenges to achieve academic, personal and career successes.

Uni was not part of Jed’s life plan when he finished school – he simply didn’t think he was smart enough.

But a chance conversation with one of his old teachers gave him the confidence to tackle tertiary study.

Jed is now completing a Master of Public Health (Health Promotion) at QUT and working as a research officer at the Queensland Aboriginal and Islander Health Council.

He has also excelled at developing his leadership skills and advocacy work for Indigenous health and education, and was a presenter at the 2017 World Indigenous Peoples Conference on Education in Canada.

** QUT’s annual Real Decisions event will be held on December 17 for anyone interested in going to uni in 2020.  Head to Gardens Point Campus from 9am to 1pm for information on courses and careers, admission pathways, equity scholarships and Aboriginal and Torres Strait Islander entry programs and support. **

Jed’s journey through school and university has seen him refine his career goals and hone in on public health.

At school, he enjoyed physical education and hospitality and started a chef’s apprenticeship.

After school, he quit the apprenticeship and switched to a Certificate IV in Fitness and a Diploma in Sports Development at TAFE – but didn’t think he was capable of taking it the next step and going to uni.

“I was working at my old school as a sports coach and I remember talking to one of my old teachers about what I would do once I finished my diploma,” he said.

“He encouraged me to go to university.  At the time, I didn’t feel I was smart enough and thought uni wasn’t realistic, but he told me that I could it and that I was smart.

“Having someone tell me this really motivated and reassured me.”

Once Jed started studying at QUT, he decided to pay it forward.

He joined QUT’s student ambassador program as an Oodgeroo Unit ambassador and an Explore Uni ambassador, which sees him work with Aboriginal and Torres Strait Islander and low-income school students.

He visits schools, shares his own experiences and welcomes tour groups to campus, busting myths about tertiary education along the way.

This year, while doing his postgraduate study, he also led a new program called Pass the Yarn, which focused on career pathways and Indigenous health and was a partnership between QUT and the Brisbane Aboriginal and Torres Strait Islander Community Health Service.

Jed is a proud Bidjira and Mandandanji man and said he had been lucky to go to a good school and follow his own path to uni.

While he believes working hard and having goals is important, he said being believed in by others could be a massive tipping point.

“It is imperative that young people get encouragement from people that university is achievable if it is something they are interested in doing,” he said.

“It is important to emphasise hard work, but having someone believe in you can have a lasting effect.  I know as that happened to me … having that former teacher of mine believe in me being able to go to university gave me the sense of empowerment and confidence to do it.”

After completing his Masters, Jed is keen to do a PhD on Aboriginal and Torres Strait Islander health.

“What has motivated me to continue studying is seeing the health inequalities of Aboriginal and Torres Strait Islander people,” he said.

“My career goals are to be a researcher within Aboriginal and Torres Strait Islander health, to try to make a positive impact and to reduce the health inequalities that are still apparent today.”

Jed has embraced uni whole-heartedly since starting at QUT and said his best advice for students was to take up every opportunity and extra activity that came their way.

His list of achievements while at QUT includes founding Indigiso (QUT’s Indigenous student society), presenting at the 2017 World Indigenous Peoples Conference on Education in Canada, and receiving a Special Excellence Award at the 2018 QUT Alumni Student Leadership Awards for his work with Aboriginal and Torres Strait Islander communities, particularly in education and health.

He is also a Student Representative Committee member for Indigenous Allied Health Australia.