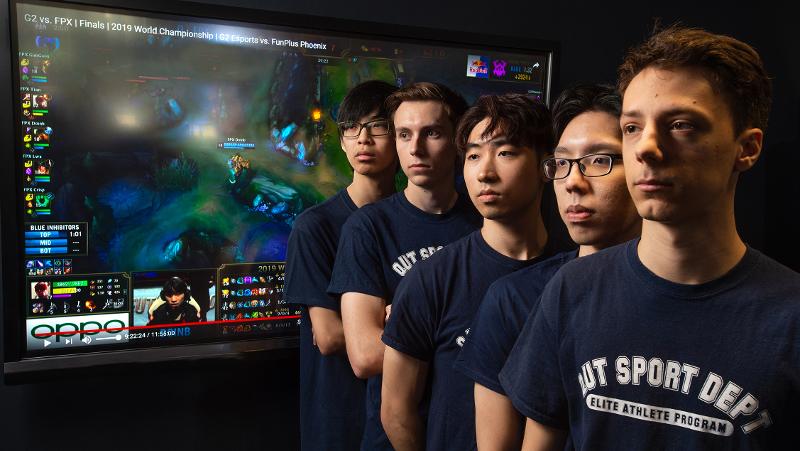 QUT students will head to China next week to represent Oceania and pit their skills against their international university counterparts as part of the World University Cyber Games Sanya Esports Festival.

Jason, Zihong and Henri are three of QUT’s 2019 esports scholarship recipients, who competed in the QUT Tigers team in this year’s Riot Games League of Legends Oceanic Challenger Series (OSC), a feeder competition for the pro league. William and Kevin were in the inaugural Tigers OCS team last year, and Kevin had a coaching role this year.

QUT Esports Arena convenor Jacob Argent will be heading with the team to Sanya, a city on Hainan Island that established a US$145 million special development fund to attract esports businesses and events.

“It is an amazing opportunity for our team to be part of an international tournament,” Jacob said. “They beat the University of Queensland in a best-of-three match to secure their tickets to this Invitational.

“It’s going to give them invaluable experience, not only in terms of competition and seeing how players from America and the other regions perform, but in getting a close look at the staging of an international event, and an opportunity to connect and to network with players from around the world.

“It is also a recognition of the work that has gone into establishing and building the esports program at QUT. The tournament is bringing together the most influential university teams from around the world, so it’s great to be part of that.”

The team will return from China in time for Kevin (Bachelor of Business – International Business), Zihong (Bachelor of Games and Interactive Entertainment) and Henri (Bachelor of Engineering) to attend their graduation ceremonies. Kevin and Zihong have jobs lined up post-graduation, while Henri is on the hunt.

But first, they have winning at the Invitational in China on their radar.

Before they fly out, the team members – minus Kevin who had a holiday in Japan already planned – will get some last-minute tournament practice this weekend, as the QUT Esports Arena hosts the first Intervarsity League of Legends tournament in Australia for university gamers.

More than 30 players from QUT, Griffith and Bond universities in Queensland, Victoria’s Swinburne University of Technology and Western Australia’s Murdoch University will compete over two days. Fans can watch the round robin event online on Twitch.

QUT is again offering five $10,000 esports scholarships to League of Legends players for 2020 as part of the QUT Excellence Scholarships program in the elite athlete category. Applications have closed, and a field of 25 selected to compete at selection trials in late January-early February. Jason, who started studying a Bachelor of Design (Interaction Design) this year, said winning a scholarship had given him motivation for university, and helped him balance his study and interest in gaming.

For Henri and Zihong, in their final year of study, their scholarships have also been an asset.

“I think that they have helped us all as players,” Henri said. “Giving us access to the elite athletes program, strength and conditioning training, and that support outside gaming that you maybe wouldn’t consider, to manage mental health and the stress that comes with studying and exams. It’s been great.”

Global esports revenue has reached about US$1.1 billion annually, with about 335 million people each year watching gaming tournaments on the web, TV broadcast and in stadiums. The global audience is predicted to grow to about 600 million by 2023.